Downriggers are an efficient way to place live bait and lure in precise zones of the water column, and all anglers know that being in the right depth leads to more successful fishing. Downriggers are consistently used by boats to target fresh and saltwater fish but seem intimidating until you see how they work. How Do Downriggers work?

A Downrigger either manual or electrically powered, mounted to a boat works by using a weight attached to 1 or more fishing rod lures to keep them accurate at a certain depth in the fresh or saltwater column while trolling at a level that is determined by you or a fish finder

Downriggers, both the manual and electric models both have their pros and cons, the manual being more portable and less expensive but it depends on what you are mounting it to, how big it is, and how deep you fish.

A Downrigger is a fishing device that is designed for trolling from any size boat. It can be used to fish a large variety of freshwater and saltwater fish. Downriggers are used when trolling for fish below the surface, which requires lures or bait to be kept at a specific depth while the boat is moving. 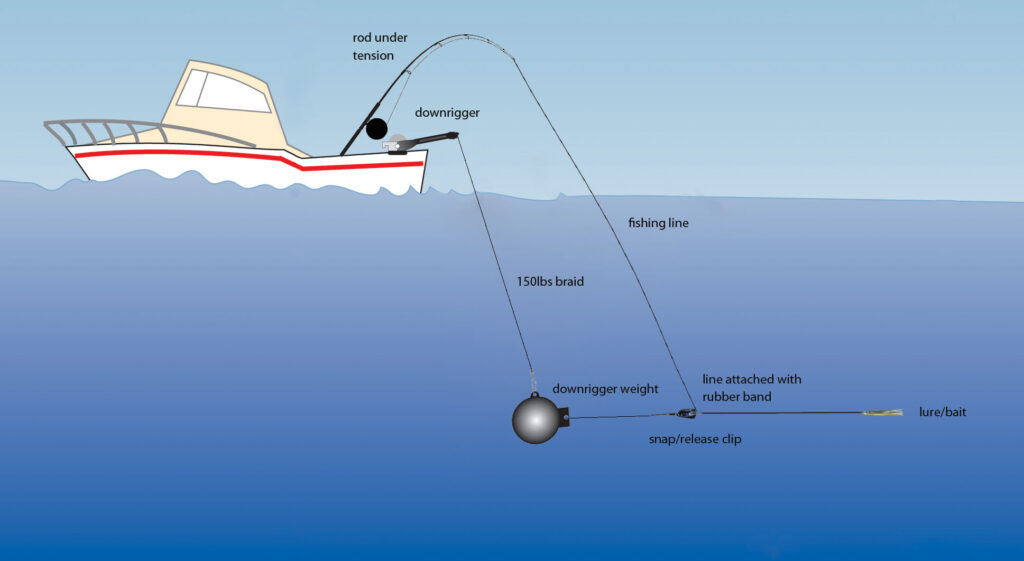 Downriggers are commonly used to target many Salmon, Striper, and Lake Trout species in freshwater when they’re in shallower depths than in the summer months. Saltwater species like Tuna, Grouper and every fish in the sea will strike a lure on the move.

Downriggers are made up of four main components:

A fishing line is attached to the downrigger cable by the way of a line release. The weight is typically a five-to-twenty-pound mass of lead which is connected to a steel cable. The spool is brought up either manually by way of a hand crank or by an electric motor.

A fish finder will determine at what depth in the water column you want your line and the downrigger will bring your fishing line and lure down to that determined depth in the water. After you set the depth, then you can make any adjustments.  With fish like salmon that strike the bait from below the angler would set just above the school.

It’s important that attention be paid to the depth in the water that could change rapidly. Running your downrigger onto rocks could cause damage to the system. Some Downriggers are equipped with automatic compensation connected to your fish finder so that if the depth changes quickly the motor will kick on and pull up avoiding problems. While trolling, the flash weight keeps your lure at your desired depth, allowing the lure to “swim” directly behind the weight. Once a fish takes the lure, the line release lets go of the line and the fish is on. When you see a fish is on, the rod will stand up the angler grabs the rod from the holder and let the fight begin.

What do Downriggers do?

How to Use Downriggers

With a manual system Downrigger, you will have to crank the cannonball up with one hand while you fight the fish with the other (unless you are with someone else). With a motorized system, you just flip the switch. You can fight the fish with both hands while you wait for the cannonball to reach the surface That is the beauty of the motorized system.

A downrigger is a device used while fishing deeper water using the trolling method, which places a lure at the desired depth. Essentially a manual Downrigger is a winch system equipped with a handle, a downrigger is spooled up with a chord, wire, or even braid.

It consists of a horizontal pole  2-5 ft long that supports weight like a giant sinker called a cannonball, generally, 4 to 15 pounds, that enables the rod’s lure (connected by a Clip that looks like a cloth pin) to get to depths in the water column that you would not be able to with standard equipment. The faster you are trolling the deeper you are fishing and the heavier weight you need. 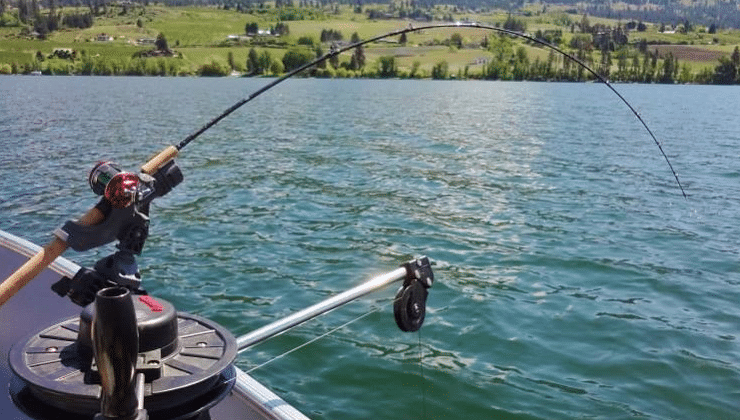 From the trailing section of the cannonball, the line from your rod attaches to the Release clip, so when a fish takes your lure it pulls off and disconnects from the weight and is free to fight.

When using a lure you want to make sure that the rod line is taught put some load on it until the rod arcs, don’t kill it but if using live bait you’ll want a little more slack in the line.

Make sure the Release Clip is not on too tight as in many cases it is so you will need to eyeball the line just in case the rod doesn’t fly up and signal a bite. If you do get a bite and the line doesn’t release from the Downrigger then grab your pole-reel down-thumb the spool and lift the rod up releasing it from the Clip then reel it in.

In most cases, the fish will be under enough pressure to disengage the Release Clip but not always. The longer the fish bites against the Clip the better your odds of losing the fish will be. Keep the Clip on as light as possible while still holding it in place.

These manual and electrical setups along with all the accessories like the Clips, Crank, Boom, or Motors run from very small right on up to ocean size for giant tuna and marlins. The weights can have a fin attached that control some of the movement that trolling creates. In a situation where you have to fish deep for any length of time, a Downrigger is an important tool for catching fish in any serious angler’s arsenal.

No matter how big the Downrigger whether an electrically powered setup built for a bigger saltwater boat or a manual crank setup made for kyack fishing they basically work the same. A heavy weight combined with a Clip attached to your fishing rod Clip-you let the weight down to the desired depth that’s wanted-You control that depth while trolling and that is the function of a Downrigger.

For the best information on Kayaks, downriggers and Outriggers stay right here at MyWaterEarth&Sky-The outriggers will provide boaters with a high level of stability while boaters are out boating. These stabilizers are ideal for boaters who are always out fishing at lakes or oceans, adding stability while standing on the boat. What is a Kayak Outrigger………………… Continue reading