Groundwater could be an hour old at a shallow or moderate depth, it may be 100 years old, at a greater depth, or after having flowed long distances from places of entry, the water may even have been in the ground for several thousand years but because of ongoing hot, dry temperatures, the world is experiencing declines in groundwater systems. What are the effects of Groundwater Depletion?

One of the main challenges to protecting groundwater is that it’s located out of sight, underground. Groundwater levels are not easily monitored with the naked eye and so supplies can be unknowingly polluted or depleted, meaning that more is taken out of the ground than can be naturally replenished back into the system. 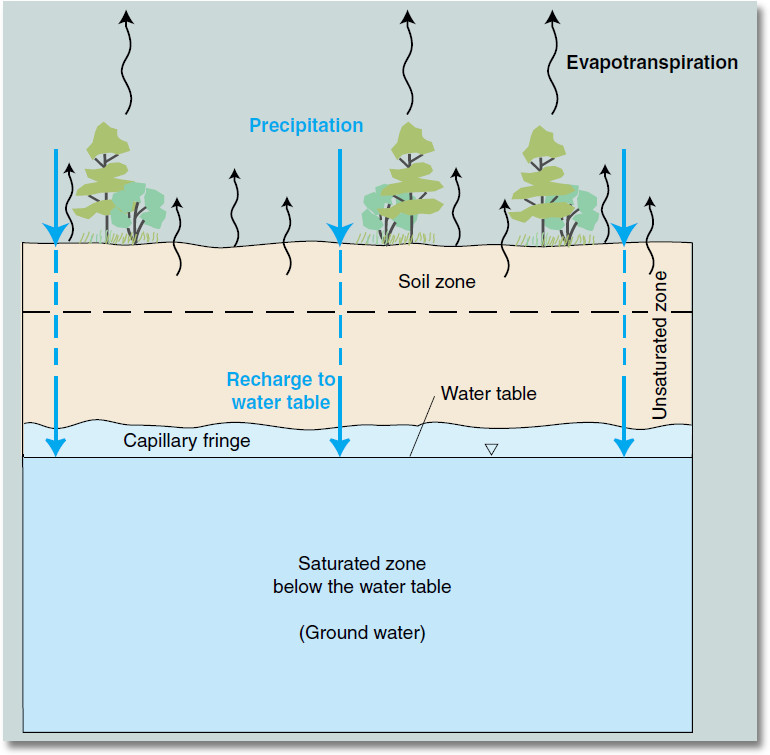 It fills the pores and fractures in underground materials such as sand, gravel, and other rock, much the same way that water fills a sponge.

If groundwater flows naturally out of rock materials or if it can be removed by pumping the rock materials are called aquifers. Groundwater moves slowly, typically at rates of 7-60 centimeters or 3-25 inches per day in an aquifer.

There is over 1000 times more water in the ground than there is in all the lakes and rivers. After Oceans, Seas, and Bays with 96.5 %  of the total amount.

Ice caps, Glaciers, & Permanent Snow come in at 1.74% of the Total Water on Earth. Groundwater ranks are 3rd with 1.69% of all water on the planet.

In fact, there is so much water under mountains, plains, deserts, and valleys that it can’t be measured. Most of it can’t be accessible or used at least without treating it first. The groundwater could be a few feet below the surface or hundreds of feet underground.

The water could be an hour old at a shallow or moderate depth, it may be 100 years old, at a greater depth, or after having flowed long distances from places of entry, the water may even have been in the ground for several thousand years.

Groundwater is part of the natural Water Cycle when some precipitation that falls to the ground finds its way into the subsurface with some of that moving further downward infiltrating the rock material that is saturated and recharging the groundwater. Eventually, some of that precipitation can reach river lakes and even the ocean. 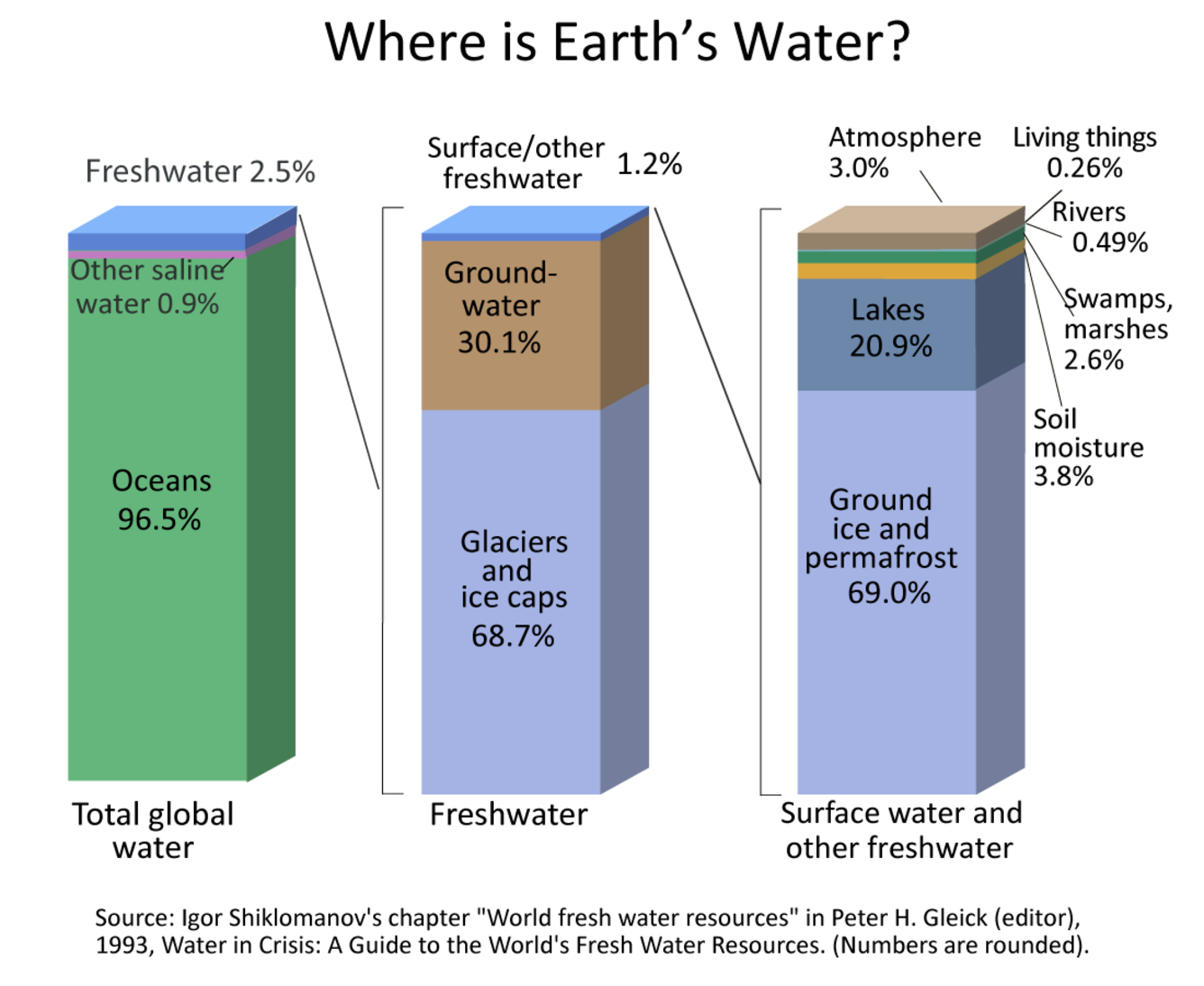 Why is Groundwater Important

Groundwater helps to keep our rivers free-flowing. Groundwater is used for drinking water by close to 50 percent of the people in the United States, but its largest use is for crop irrigation and agricultural production providing food for regions all over the world.

Groundwater is the source of water found underground beneath our feet in the cracks and spaces in soil, sand, and rock. It is held in aquifers surrounded by permeable rock and or sediment and can be extracted through wells or can rise up to the surface itself, bubbling up naturally through springs or discharged into lakes or streams. Helping to maintain and replenish them.

It is also a source of water for wetlands and springs which are of critical importance for freshwater biodiversity and migratory bird conservation when the rainfall gets low the environment stays steady keeping wildlife under control with groundwater’s ability to be recharged and replenished naturally. If Groundwater is depleted, rivers, streams, and wetlands that provide a home for living organisms, animals,  fish and humans can be threatened.

The water in an aquifer is called Groundwater and an Aquifer is a geological formation that has the capacity to store and transmit water most aquifers are un-confined by a layer of rock and located close to the surface and other types of aquifers that are deep in the ground and are closed or confined to the surface located between two layers of impermeable rock.

Half of the total population of the United States depends on Groundwater for drinking water. The most common problem with Groundwater supplies in the areas where people depend on groundwater storage is overpumping at a faster rate than it can be replenished. Groundwater Depletion is primarily caused by sustained groundwater pumping. Some of the negative effects of groundwater depletion are:

Drying up Wells-Pumping Groundwater at a faster rate can lower the water table below which the ground is saturated with water, can be lowered.  If groundwater levels decline too far, then the water well owner might have to deepen the well, drill a new well, or, at least, attempt to lower the pump.  Also, as water levels decline, the rate of water the well can yield may decline that lowering the water pressure coming out at the discharge.

Reduction in streams and lakes is also affected by a lowering of Groundwater because of the interaction between them. A great amount of Groundwater can add to or deplete a body of water like a river or stream based on the geography or the climate and end up affecting the environment around the whole area.

Land Subsidence-The basic cause of Land Subsidence is the loss of support underneath that piece of land. If the water is pumped out then the land on top can collapse and fall through.

Increased Cost of the User- As the depth of the well’s water increases (the well starts to drop) then more energy has to be used to lift the water up to the land surface which adds to the overall expense of operating the well.

Deterioration of Water Quality-as water moves throughout the system there is always a threat of contamination or salt intrusion. Pumping can disturb the salt line and pull it into the groundwater polluting the drinking water.

Groundwater rates have been soaring as its being pumped at huge growing rates for irrigation and industry and urban development. As demand increases, we can see how taxed the underground supplies of water dwindling in front of our eyes. This causes all kinds of problems with food jobs and health besides degrading water wells that were once healthy.  On top of this is the threat of higher temperatures and drought brought on by Climate Change.

One Solution is called Artificial Groundwater Recharge which works off of a Natural Recharge that works off of rain and streamflow that soak into the ground by gravity to the underground aquifer resupplying the system. In Urban areas, rooftops, hard roads, and parking lots can hamper this natural process. Artificial Recharge water this water that is normally wasted can be directed into underlying groundwater basins or diverted into holding tanks used for Depleted Water Systems.

Groundwater Storage is another practical solution to overtaxed water systems by providing a tool to able to manage Groundwater more sustainably. Augmenting a water supply through recharge into the aquifers can present a cost-effective way of increasing the availability of Groundwater supplies for the dry times ahead. This is without the huge costs of building dams or reservoirs.

For great articles on Private Wells stay here on MyWaterEarth&Sky- It is estimated that more than 13 million households rely on private wells for drinking water in the United States (US Census American Housing Survey 2017). EPA does not regulate ……… Continue reading

References: USGS- What is Groundwater