The country of India is suffering the worst water crisis in its history with some 600,000 people affected by water shortages and things don’t look better. What are the reasons for India’s water problems?

India’s water crisis is expected to worsen as the population increases from 1.3 to 1.6 billion by 2050 due to:

With a diverse population that is three times the size of the United States but only one-third the physical size, India has the second largest population in the world next to China which is expected to surpass them creating more demand for water in the near future.

Located in the tropics, India has never faced such severe systemic water crises, due to the snow-capped Himalayas forming its northern boundary. India’s water has seen changes over the years.  The onset of:

India’s water crisis is often attributed to a lack of government planning, increased corporate privatization, industrial and human waste, and government corruption. In addition, water scarcity in India is expected to get worse as its population is expected to increase to 1.6 billion by the year 2050.

Next to China, India has the world’s largest population at over 1.3 billion people. That is as of right now because India is on target to pass China in the next few years. Because of this and a few other factors, India is facing a huge water scarcity problem.

Water management in India can’t satisfy the population’s demand and projections are that almost half of India’s people won’t have access by the year 2030. The government has declared this “the worst water crisis in India’s history”

Rural homes and villages in India depend on groundwater wells for safe drinking water. Their freshwater consumption is slowly dissipating from an average of 8 liters per week in these arid households whereas the average per week in American households for a family of 4  is 100  liters.

For generations, Indian agriculture has been the primary occupation for many of the country’s people. But for the past few decades, groundwater levels have become depleted and dangerously low. This caused the wells to dry up and makes the water supply held at the dams only seasonal.

Not only has this made it nearly impossible for farmers to grow and harvest crops, but it’s also made clean drinking water scarce. That meant that farmers and low-income people in more rural areas sometimes had to miss work, lowering earnings, even more, to spend a great deal of time fetching water for their families.

Not being able to depend on a clean water source or meet its demand called (Water Stress or Water Crisis) only made it harder for people already suffering from poverty.

Much of the water crisis in India that started in the rural areas and now has reached the urban towns and cities, is caused not by natural disasters, but rather because of severe mismanagement of water resources, poor governance, and apathy about the magnitude of the crisis.

As the water scarcity increases in the rural areas of India government officials expect populations will move into urban areas of the cities adding stress to these areas that don’t suffer from water stress as of yet.

Some areas of India are fortunate to have a relatively wet climate, even in the aridest regions. However, with no rain catchment programs in place, most of the water is wasted, displaced, or dried up instead of used and harvested adding to the supply of safe drinking water. 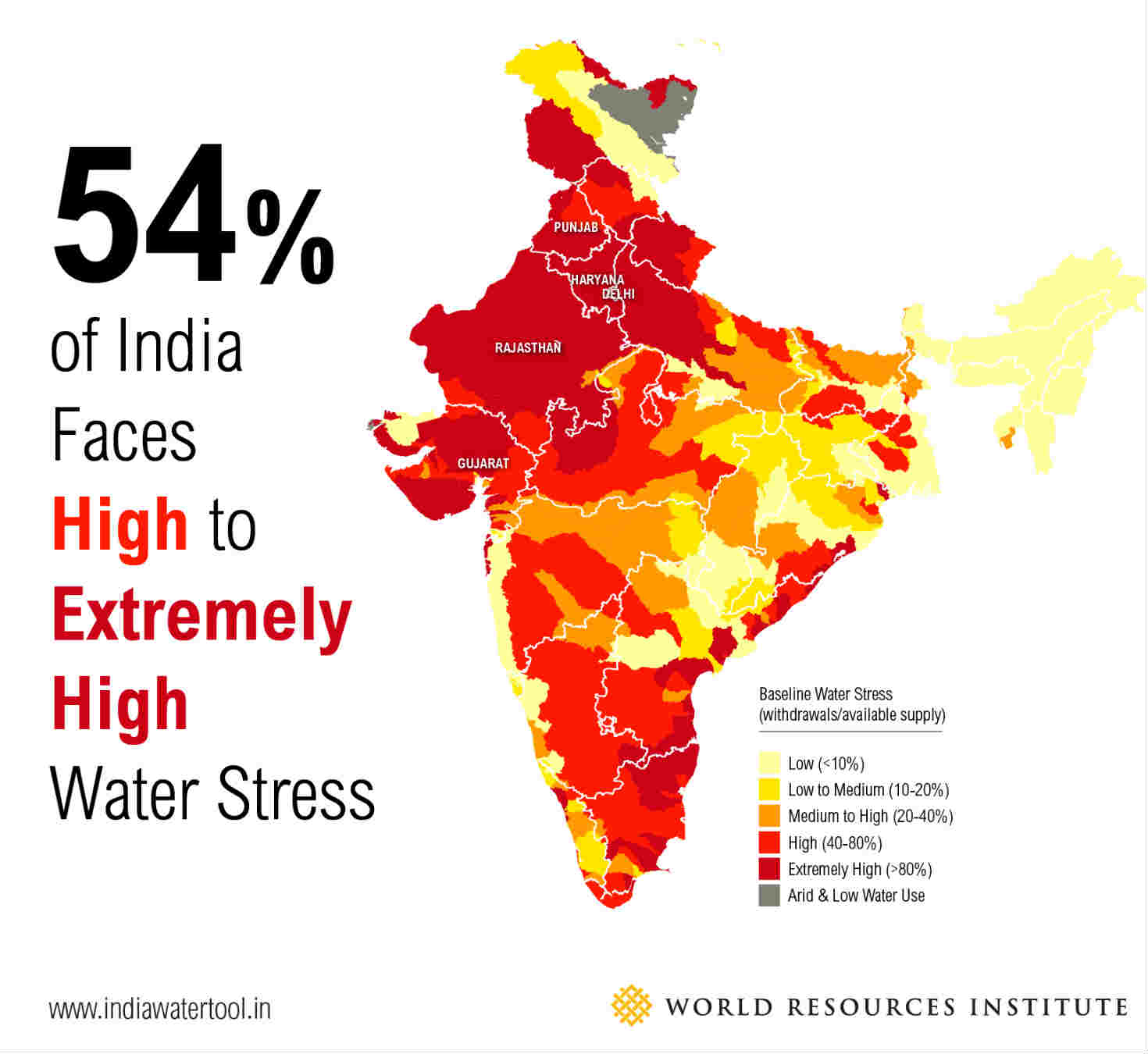 Another source of water besides Groundwater for India is Surface Water. The collecting of Surface water that makes up India’s lakes, reservoirs, rivers, and streams has been drying up around the country. This is because of heat waves and delays in monsoon rainstorms that don’t come as usual.

When it does rain, India doesn’t take advantage as well as it should with their largest reservoirs collecting very little by a percentage of annual rainfall. Dryer warmer summers and less rainfall compound India’s water problems.

Water issues or lack of water cause the death of over 400,000 citizens of the country of India. Because of the growing population and water scarcity problems that India is experiencing the demand for water in India according to scientists will be 2x the available water supply in the near future. If there is not enough water for agriculture and farming then India’s water problems will equate to a dwindling food supply.

The Water Crisis within India has also created serious disputes within the country over water rights which have led to the deaths of many people. There are also problems with water sharing with rivers that lie on borders with other countries like China, Pakistan, and Bangladesh.

More than 70% of India’s streams are contaminated with some kind of pollutant. India’s water quality is ranked 120 out of 122 countries around the globe. The most common problem pollutant is sewage and farm agricultural runoff factory effluent and unregulated industrial contaminants improperly discharged.

Only 20% of India’s sewage is treated so it’s mostly dumped directly into the environment. Sacred rivers like the Ganzee (the longest tributary in India) and the Yamuna river in Deli are over 10,000 times the safe maximum limits for Fecal Bacteria which has led to millions developing health problems.

The World Bank estimates that 21 percent of communicable diseases in India are linked to unsafe water and the lack of hygiene practices. More than 500 children under the age of five die each day from diarrhea in India alone. 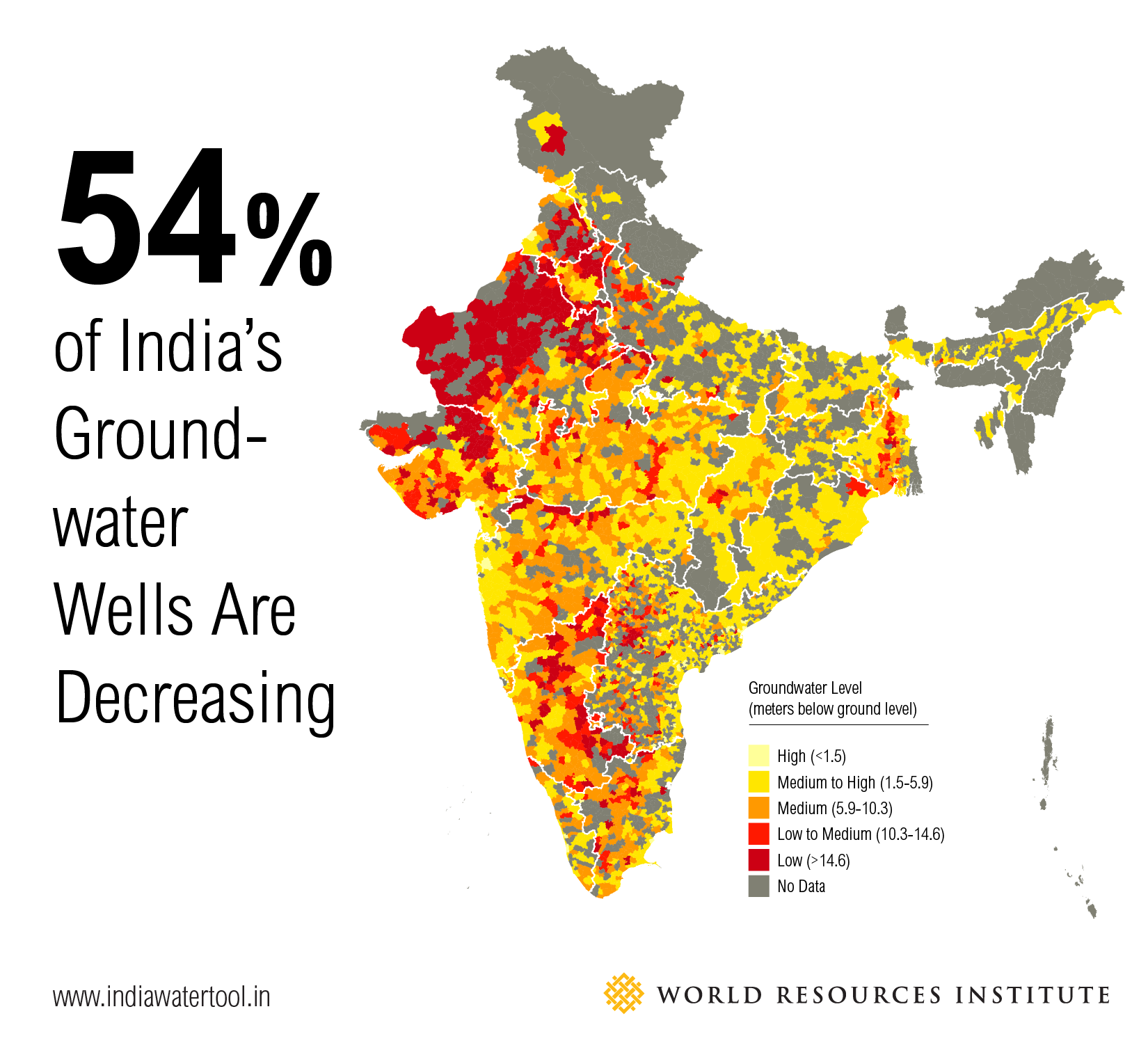 The government has picked up the ball and started it rolling by introducing the Ministry of Government of India (GOI) and States have expended more than $2 billion per/year, with plans on providing adequate and potable water to more than 91 percent of rural people in 1.5m habitations by 2024. This is a  major accomplishment for RWSS infrastructure provision in the last few decades.

The biggest solution that would improve India’s water problems would be: