The highly aesthetic Water Hyacinth is the flower of Apollo, the god of the sun, and it is considered to be a sign of not just peace, dedication, and beauty, but also power and pride. As a representation of joy and love, the hyacinth is frequently used in the decoration of Christian churches. Why is the Water Hyacinth Invasive?

At present, it occurs as a weed throughout tropical and subtropical regions of the world, including North and South America, Africa, Asia, Australia, and New Zealand the Water Hyacinth is considered the worst aquatic weed in the world.

What is Water Hyacinth

A water hyacinth,  is considered any aquatic plant of the genus Eichhornia of the pickerelweed family (Pontederiaceae), consists of about five species, native primarily to tropical America. 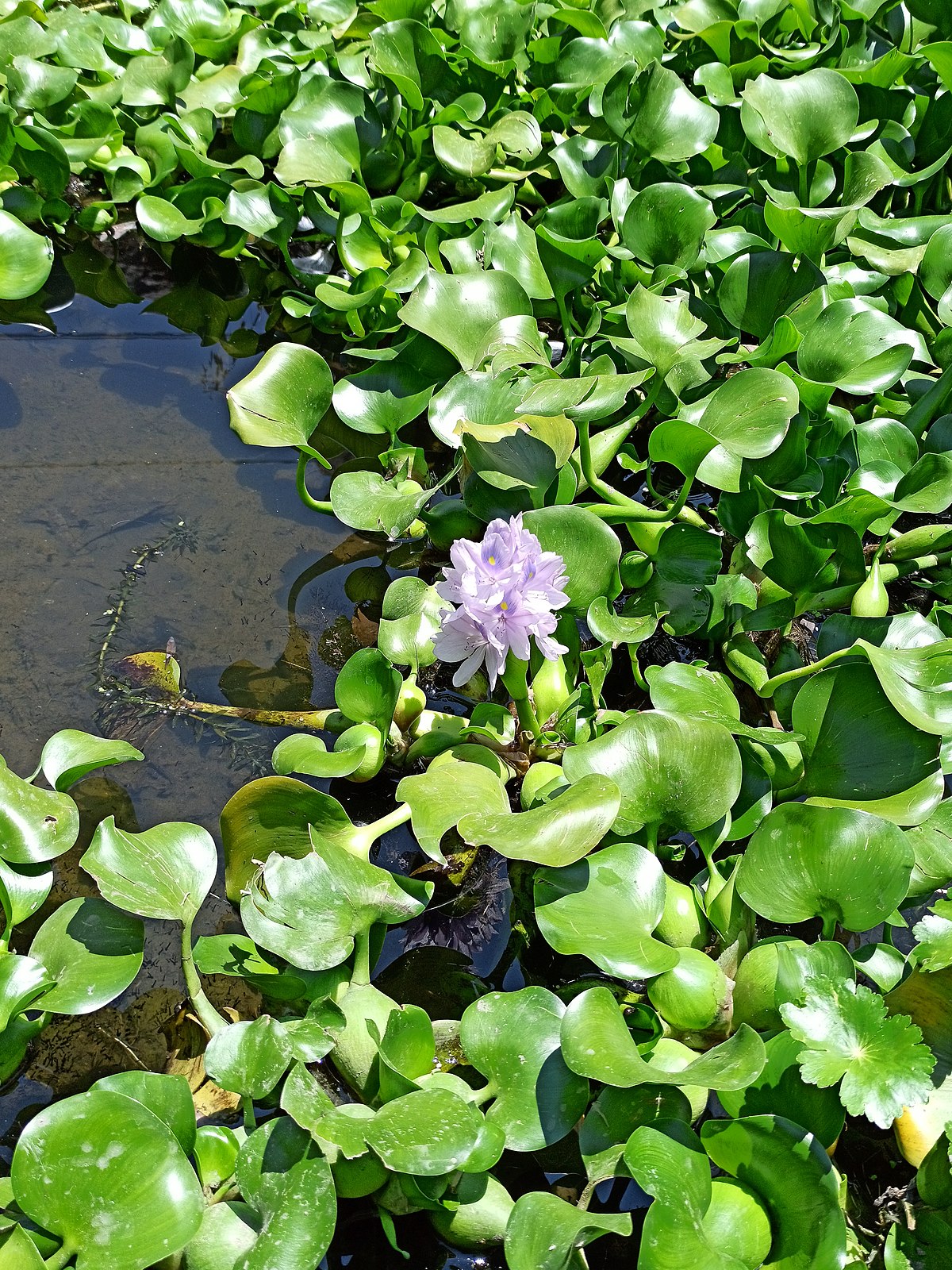 Some species float in shallow water while others are rooted in muddy stream banks and lakeshores. All have slender rootstocks, feathery roots, rosettes of stalked leaves, and few to many flowers arranged in spikes or clusters in the leaf axils.

The common water hyacinth (E. crassipes) is the most widely distributed species. Its leafstalk is spongy and inflated, and the upper lobes of the purple flowers have blue and yellow markings. It reproduces quickly and often clogs slow-flowing streams. It is used as an ornamental in outdoor pools and aquariums.

This large aquatic plant is native to the Amazon basin. Its thick, waxy, oval-shaped leaves are 4-8 inches across and branch out from the center of the plant on modified stems that may rise as much as 1 meter above the water surface. The mass of fine roots that hang in the water underneath the plant is dark purple or black with small, white root hairs.

This beautiful Hyacinth plant can damage the environment by clogging up lakes and dams and killing native fish. The invasive plant has negative effects on water quality and water flow destroying the structure of the ecosystem within the ecosystem.

Once the water hyacinth starts to grow it will cover the surface of a lake or river it will then change the chemistry of that body of water and everything that lives below it. All it needs is a small rooted plant and it will take off multiplying and increasing substantially.

The usual size of a water hyacinth plant can double in as little as a couple of weeks, and it can grow quickly enough to form a mat on the surface of the water. The presence of water hyacinth in a region caused the amount of oxygen and nutrients in that area to decrease. In addition, both the flow of water and the traffic in the water will be obstructed by the water hyacinth. 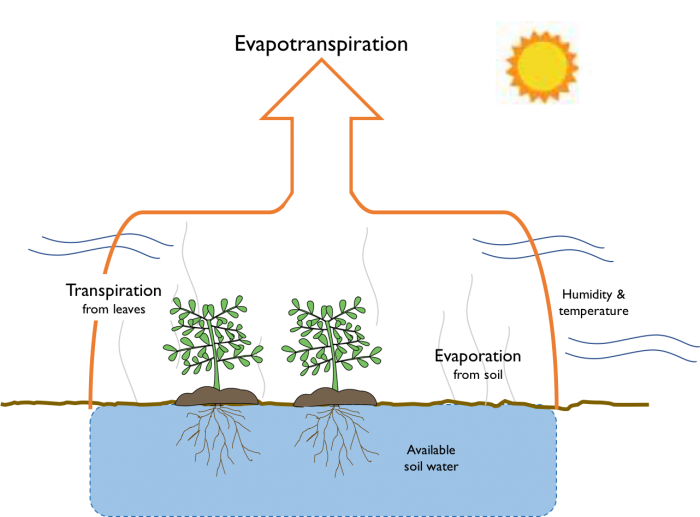 Terror of Bengal is the reference given to the Water Hyacinth plant, which was introduced into India because of its beauty. But since then, it has spread rapidly in Bengal and other regions as an invasive type of plant, destroying other species by draining the oxygen from their aquatic environment.

This aquatic plant known as Eichhornia Crassipes also goes by the name Water Hyacinth. It is also known as the ‘Terror of Bengal.’ This is because it covers the surface and blocks the amount of sunlight that can reach the water and the amount of dissolved oxygen (DO) that is available in the water, both of which are essential for the health and growth of fish and other aquatic species living in the water.

The aquatic plant is native to the Amazon in South America. However, it has been introduced all over the world and has become invasive and detrimental in other areas when it is grown outside of its own original habitat. It is considered the worst aquatic weed in the world. 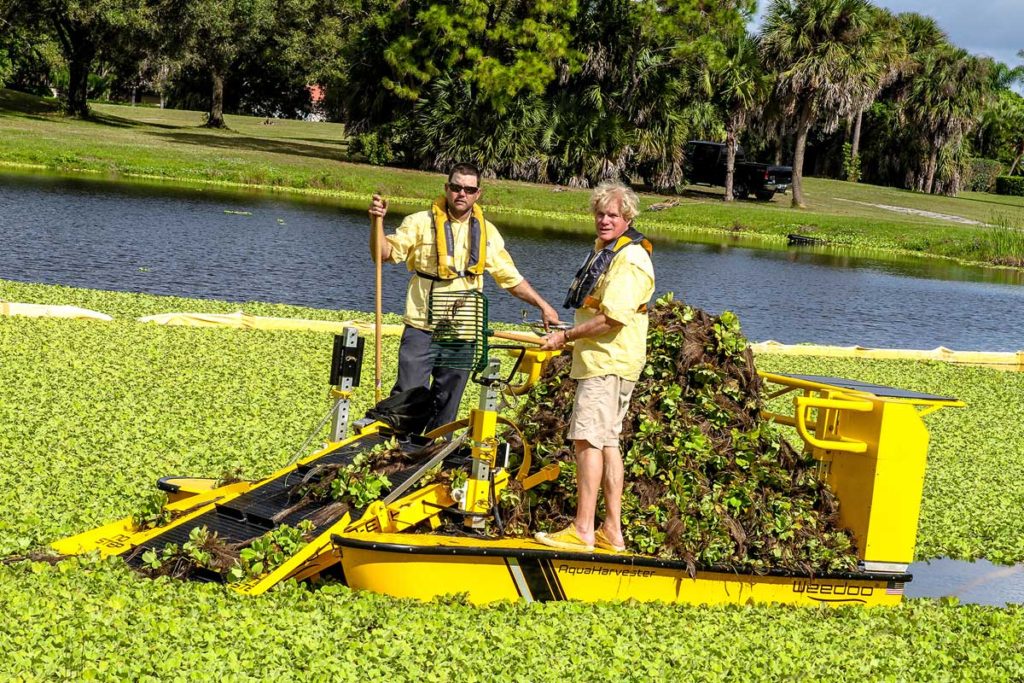 Aquatic Weed Harvester acts like a lawnmower, and cuts the vegetation, collecting and storing the weeds on board. One horizontal and two vertical cutter bars sever the vegetation as the machine moves forward through the water. When the storage hold becomes full, the weed harvester returns to shore to unload. Since Water Hyacinth is a floating plant it can be removed by raking or skimming the surface of the water.

Aquatic plant and weed harvesters are hydraulically driven using reciprocating knives mounted on the harvesting head to cut the aquatic vegetation. The vegetation is then transferred onto the conveyor system located on the closed deck barge.  The storage conveyors are gradually filled up with tightly packed plants and this harvested biomass is then transferred to the shoreline or into a dump truck via a shore conveyor.

Management of this weed can come from biocontrol to spraying to raking the surface of the water and physically removing the mats of overgrown biomass relieving the water of depleting oxygen levels and decreasing the invasive plants’ competitive advantages over the native plants.

Water hyacinth has plenty of benefits for humans and nature even though it is a weed, only if the amount is under control. For the environment, this plant can reduce water pollution and be processed as animal feed, compost, and bioenergy. Water hyacinth is an aquatic plant that absorbs lead to supply nutrition for growth.

Water hyacinth is a highly popular pond plant due to its beauty and ability to absorb excess nutrients from the pond where excessive nutrients need control. The problem with Water Hyacinths is that don’t play well with other natural plant species they dominate where they make their home.

Water Hyacinth plants are used in bio-remediation and wastewater treatment to break down nitrogen and clean water. It can also remove heavy metals and other toxins from contaminated water.

For more great information on environmental issues of today like this one just here on MyWaterEarth&Sky-If properly designed, desalination plants that use RO can consistently deliver high-quality water to consumers. Even more importantly, the quantity of water stored in the ocean is so vast it’s ……………….… Continue reading