It’s the night before the greatest day of a 14-year-old boy’s life, no, not Christmas it’s the night before Opening Season of Trout. You buy the latest tackle and lures along with fresh live bait the night before you and your buddies start the long walk down to the freshly stocked lake early to get a good spot, telling stories about catching your limit in the cold April air where the stocked trout are hungry and jumping out of the near-freezing water when we get there. What is the connection between Trout Activity and Water Temperature?

Trout are cold-blooded fish that prefer to live in colder H2O around 53°F which holds more dissolved Oxygen but as H2O warms, oxygen begins to dissipate, causing trout to feel stressed well before low oxygen reaches lethal levels but still affecting their activity & location in the H2O column.

Trout temperature tolerances vary by species, but not by a lot with Rainbow and Brown being the hardiest they are the most stocked and the most taken on the First Day of Trout Season.

When Are Trout Most Active

There are many variables that go into when Trout is the most active. The most obvious time is in warmer months when the temperatures are starting to climb then early in the morning when the air and water are cooler than the rest of the day. Then late in the day when just before dark when the sun going down for the same reason. When the sun comes up in slightly warmer temperatures look for signs of insects over a stream even in early spring when a few degrees can make all the difference.

Those slight rises in the warmth will stimulate life meaning smaller insects that native to the water and the ecosystem. Once you see a few insects flying over the water then nature starts to wake up the bugs then the birds then the fish will rise up to those thermal layers of warmer water are exposed to the sun. It doesn’t take long. Fly-Fishermen use the native flies to catch the native Trout that can live in the same waters for up to 20 years. Trout who swim the streams love to feed on insects, aquatic life, and flies.

In early spring try using insects more towards the midday where the sun gets a few hours of solar rays on the water and in later spring where the morning hours are cool enough because the sun hasn’t had the chance to push the temperatures too high for the Trout’s liking. Trout is kind of funny when the water’s temperature is involved and will eat and stay active as long as the environment is comfortable around them and around a stream when the temperature breaks ever so slightly. A few degrees can act as an alarm clock waking up the whole ecosystem including the Trout.

I like These Rules of Thumb for catching Trout

So you may see some Trout facing current on top of a stream are probably stressed and lack the amount of oxygen to eat or fight after you hook them. You may think they’re feeding, but they are not in fact their mouth will probably be closed while they are trying to circulate more water around their gills to get more dissolved oxygen. It’s like they are gasping for air.

This makes them a non-candidate for a Catch and Release Fish. There is a considerable consensus that all three major trout species (brook, brown, and rainbow) begin to experience some level of stress at around 65 -68°F (20°C), with that stress increasing rapidly as the temperature rises further. In general, Trout are the most comfortable at about 53°F

On days when temperatures start to rise, and especially during extended periods of high temperatures, the catch and release fisherman should pay specific attention to stream temperatures throughout the stream he or she is hoping to fish. When temperatures in moving water exceed 68°F (20°C), it’s best to call it and try it another day.

What a fisherman needs to know is when a fish starts to stress and just like humans when they are stressed they are less likely to chase a lure or even eat a meal that is presented to them. Rainbows and Browns are the hardier fish of the trout family, which is why most states choose to stock them in their streams and lakes.

How to Catch Lake Trout In Summer

Lake Trout is still the most popular fish in a big lake to fish for and up north where the water stays colder they can be fished all summer long in deeper water. Jigging’s erratic motion mimics a wounded fish and is the preferred method for catching Lake Trout. One of the top lake trout fishing tips is knowing the best lake trout jigging lures to use. When learning how to catch lake trout, it’s important to know that they prefer light lures so consider stocking up on small spinners and spoons. If you want to try live bait, try nightcrawlers, salmon eggs, or minnows that mimic their native prey.

Lake trout prefer to be in approximately 53-degree water. Their depth and eating habits will change with the weather. They will come up in the water column if they are hungry enough.

Use lightweight tackle Use a light-action rod with a 4 to 6-pound test and would bump that mono string up a 10-pound test for the deeper Lake Trout fish depending on depth. This is the best rod to use for trout fishing and allows you to use a variety of techniques to catch your trout.

The lighter line has less friction with the water, allowing you cast your line to bump the very bottom of the lake with ease. Research source Some lake trout can be over 35 pounds, you will need a heavier rod for these. From my experience, the bigger Lake Trout don’t taste the same as the smaller Rainbow or Brook Trout but they are fighters and pure fun to catch.

From a boat use, the vertical fishing method called Jigging fishing method read about this method on MyWaterEarth&Sky from an earlier article called Jigging Fishing Technique. Jigging Fishing–is a type of Motion fishing with a jig, a certain type of fishing lure. A jig normally consists of a lead sinker with a hook molded into it and usually covered by a soft body to attract fish. Jigs are intended to create a jerky, vertical motion, as unlike most spinnerbaits which tend to move through the water horizontally. To be successful an angler who is using the Jigging Technique because the art of Jigging is more the motion that gets the fish attracted to the lure or bait and elitists a bite.

Fishing for Trout in Lakes or rivers you need some quick information without the bells and whistles of expensive electronics that some fresh and saltwater boats have on board. Trout move 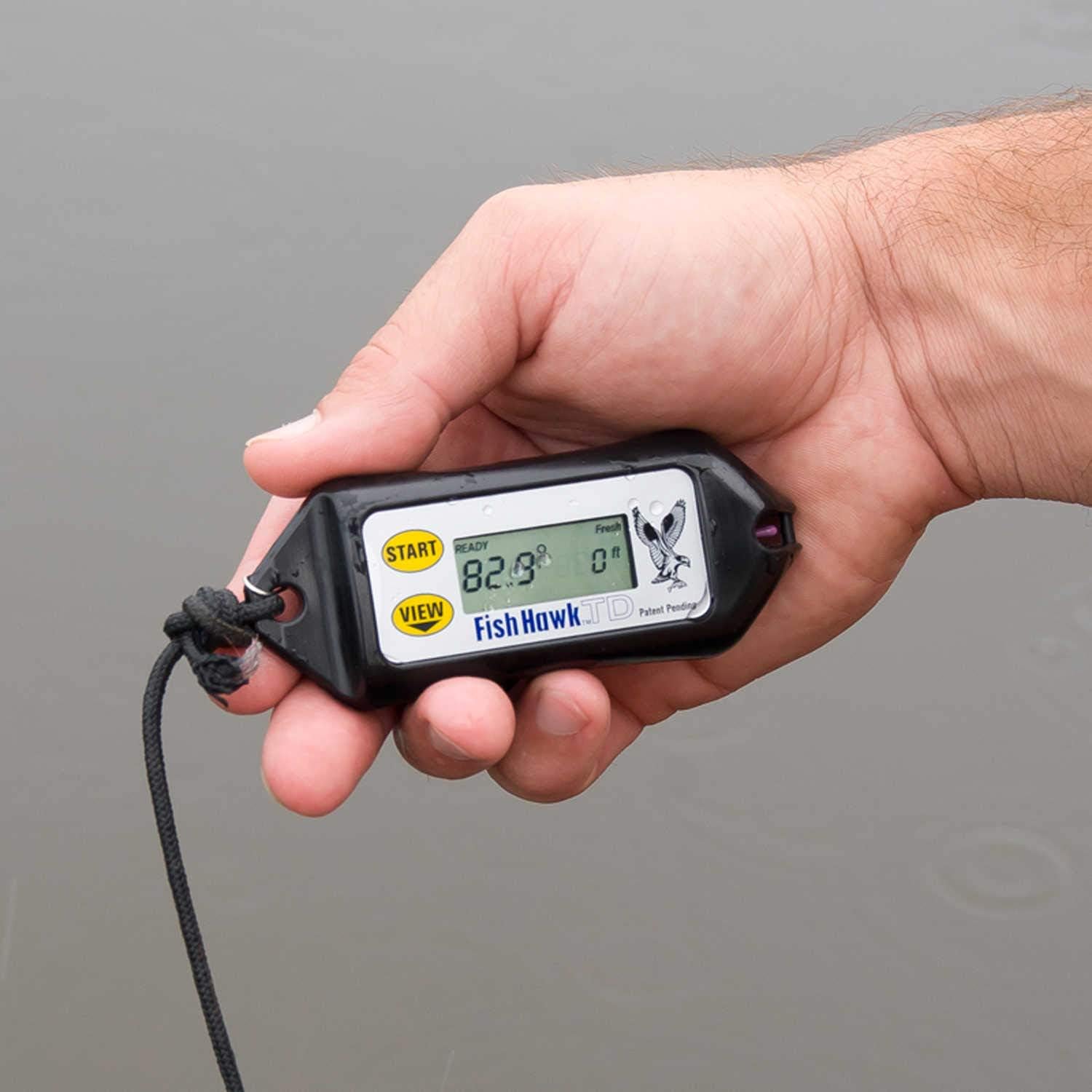 according to temperature in the water column moving up and down to feed or find colder water that happens in layers in a lake. They are comfortable at different levels in different seasons as the water warm or chill.

On any size boat, you can get the depth and temperature with small inexpensive electronic equipment like this device that fits on a keychain. Triple S Sporting Supplies, In Fish Hawk Electronics TD Digital at-Depth Water, found on Amazon and recommended by MyWaterEarth&Sky can work alongside the Trac Outdoors Fishing Barometer – Track Pressure 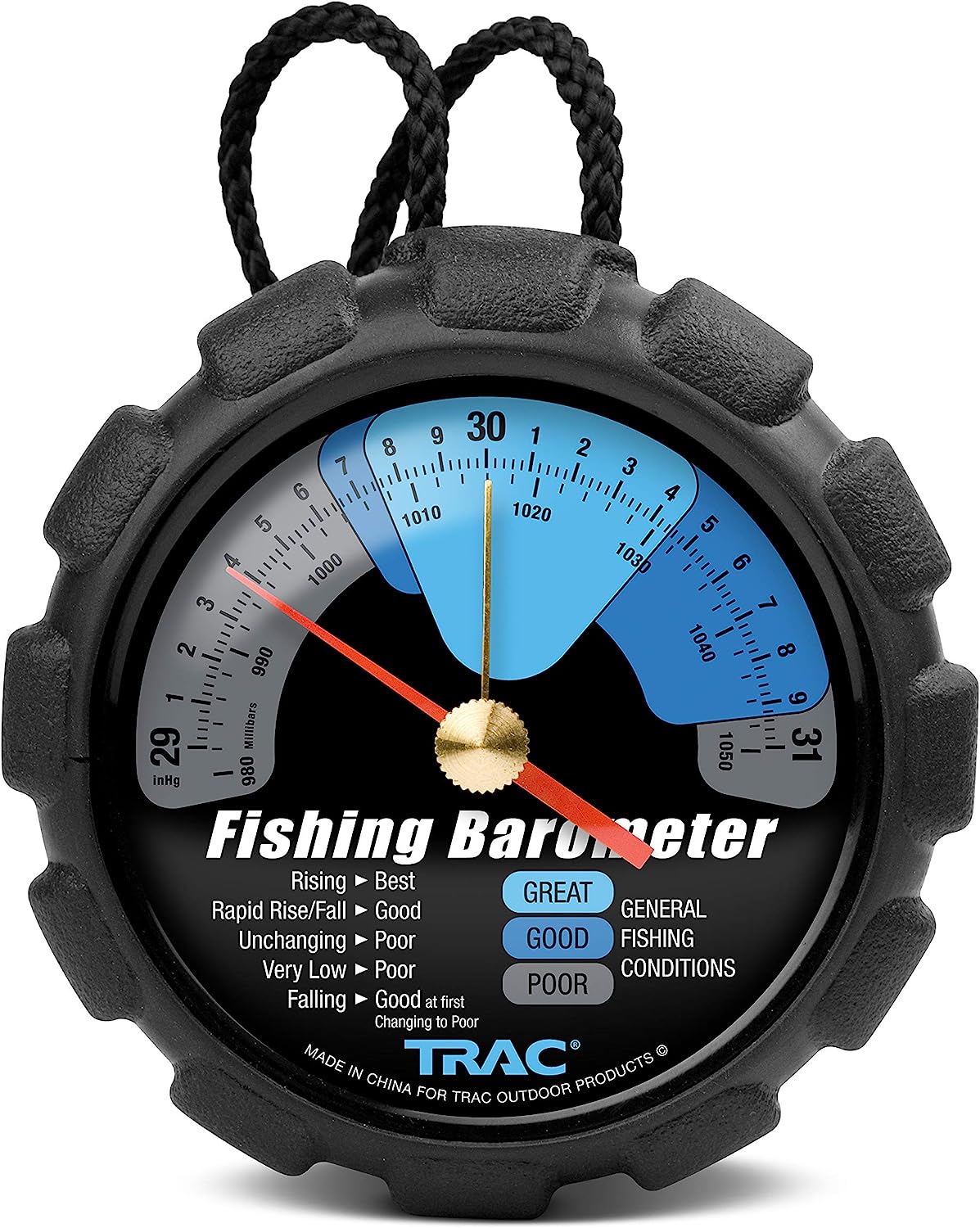 Trends for Fishing Success – Easy Calibration add both of these small but powerful tools to your tackle box monitoring Baromic Pressure and Temperatures can put you ahead in the game with more action!

The lake trout are found throughout most of Canada and well into Alaska as well as the Great Lakes and in sections of the western U.S. where it has been introduced. In the southern portions of its range, or where introduced south of its native range, it seeks out the cooler waters of deep lakes. In northern lakes, it may occur in either shallow or deep water.

The body is typically grayish to brownish with white or nearly white spots that extend onto the dorsal, adipose, and caudal fins. There are no red, black, or haloed spots of any kind. Once you know the temperatures at each level in the water column then you’ll know where the Trout are and most likely where they are feeding at.

Catching Trout is an all-year sport with the right set-up and equipment you’ll be able to locate them because you’ll know where to look no matter how deep the water is. In the summer months or Winter, trout are available if you know where to look for them. Long before Opening Trout season when your State is stocking the lakes and streams and well after that, Trout can be caught in a location near you.

Don’t forget to check your State’s regulation for Trout Season. In Pennsylvania, it’s the opening day which this year is earlier (April 3rd thru Labor Day, Labor Day until Dec 31st-which is the Extended Season added).  Check with your own State for details.

When the water temperature hits 68 degrees, you should stop fishing for the Rainbows and Browns in the river and streams and head out to the bigger, deeper, cooler depths for Lake Trout.

References: Hatch – Trout and water temperature: How hot is too hot?