California is America’s 3rd largest state in the country with no reliable rain from drought and a lack of sufficient water resources to satisfy a population of 39 million and growing along with a large economy based on agriculture, water distribution is based on who gets it and how much is expected to be a huge problem in the near future. What type of water rights are in California?

In California, water rights are based on a hybrid mixture of riparian & appropriative rights issued & managed by the state & federal government to benefit all Californians giving individuals & others the right to beneficially use underground & surface water subject to seasonal & drought conditions.

When you purchase real estate in California it may include a water right. Water rights include the use of underground water, such as acquired through a well, and the use of surface water available above ground, such as from creeks, rivers, and lakes.

People that live in California do not have and cannot acquire a prescriptive right. The courts have clarified that since 1914, the only way to acquire a new water right is to apply for and receive a right water permit from the State Water Board. 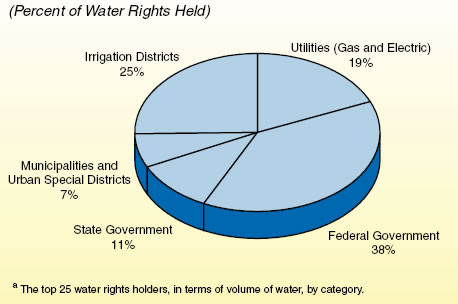 In the state of California, up to eight x, more people have water rights than there is water to supply them. The oldest water rights belong to land that borders surface water like rivers, creeks, streams, and lakes. But only a property that borders the water can hold the rights. You cannot sell the land without the rights.

If you parcel out your land, only the smallest piece bordering the water holds what’s called  “riparian” water rights. Other, newer licenses, have to wait in line until after riparian holders take their share of the water

According to the California Constitution article 10 section, 5 The use of all water in California that is appropriated or may be hereafter appropriated for sale, rent, or distribution is here declared to be a public use and is subjected to regulation and control of the state in the manner described by law.

It’s up to the state to issue permits and licenses for use of that water. The permits regulate how much water can be used as well as determine if the water is being beneficially used. The state can even issue a fine to a water permit holder if they feel the owner is not using the water efficiently.

Water Rights in the US fall into 2 categories and historically have been given up to the person owning land touching water. This form is called Riparium water rights, the most common form for allocating water across the eastern United States.

In the west, however, with the onslaught of the Gold Rush miners needed water far away in desolated dry lands. This began the water rights system called “prior appropriation” This system says whoever used the water first regardless of that person owned the land where the water was located.

But if you don’t use that water for a certain length of time then you lose the rights to the water. California is one of the only states that still uses both these water rights systems to control water usage throughout the state.

Prior Appropriation of water rights has caused numerous problems over the years especially in drought as ranchers and farmers have used sots along rivers to supply their ranches. As water supplies dwindle more and more problems are occurring regarding who gets the water and how much they can take. 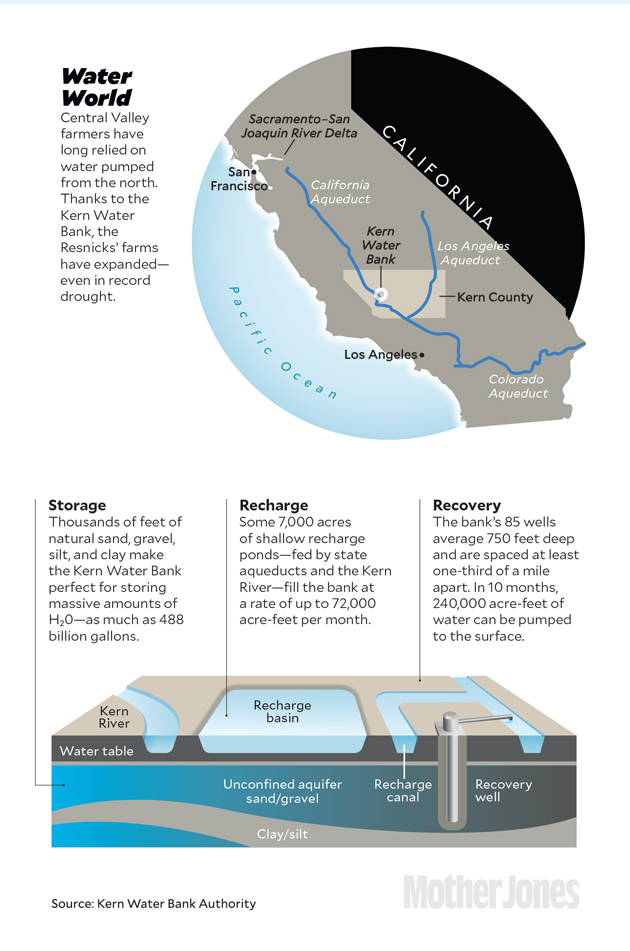 The Kern Water Bank is a 32-square-mile area in the Southern San Joaquin Valley that stores up to 1.5 million acre-feet of H2O underground, almost 3x the storage capacity of nearby Lake Isabella. Water is stored underground in the Kern Water Bank during wet years and recovered during dry years for agricultural and municipal and industrial uses.

In the mid 90’s approx. 84 percent of the water bank is effectively in the grip of two mammoth businesses: Paramount Farms, an agricultural holding company that owns Westside and is controlled by Los Angeles billionaire Stewart Resnick.

Control of California’s largest underground water bank was illegally bestowed on a handful of private, wealthy agriculture and real estate companies in the 1990s, according to a group of environmentalists, sport fishermen, and delta farmers.

The man who controls it with 48% ownership is Stuart Resnick. The Beverly Hills billionaire is the largest tree-fruit grower in the country, with well above 100,000 acres in production in the Central Valley.

Who Owns the Water in California Stewart and Lynda Resnick who own Fiji Water and POM Wonderful are now coveted across the globe. Their donations keep the lights on in art museums across the country. Ex-Gov. Arnold Schwarzenegger and Arianna Huffington count them among their dearest friends.

The Resnicks expanded into agriculture in 1978, mostly as a hedge against inflation. They purchased 2,500 acres of orange trees in California’s Kern County citrus belt. Ten years later, during the state’s last great drought, they snatched up tens of thousands of acres of almond, pistachio, and citrus groves for bargain prices.

By 1996, their agricultural company, Paramount Farms, had become the world’s largest producer and packager of pistachios and almonds, with sales of about $1.5 billion; it now owns 130,000 acres of farmland and grosses $4.8 billion.

The Resnicks, who live in a Beverly Hills mansion and have a second home in Aspen, Colo., are among the nation’s largest corporate farmers and are generous philanthropists and political donors, giving $536,000 to Democratic and Republican California governors in the last decade.

The Los Angeles Business Journal estimates the couple’s empire is worth $1.5 billion. It includes about 120,000 acres in California’s Central Valley –– where they say they own more fresh citrus, almond, and pistachio trees than anyone else in the country and a facility akin to the Fort Knox of water.

Stewart Resnick uses more water than any other person in the West. His 15 million trees in the San Joaquin Valley consume more than 400,000 acre-feet of water a year. The city of Los Angeles, by comparison, consumes 587,000 acre-feet.”

Measuring approximately 270,000 square acres, it is one-third the area of Rhode Island and approximately the size of the city of Los Angeles. and Tejon Ranch Company, a real estate firm proposing a resort, 3,500-home development

Overall, Tejon Ranch has a right to about 21,000-acre-feet of state water for urban and agricultural use each year but would receive just 72% of that on average and far less in a dry year, according to the state. An acre-foot is enough water for two families of four for a year.

The United States government may affect water rights issues through laws such as the Endangered Species Act protecting endangered or threatened species and the Federal Power Act the licensing and operation of hydropower dams and reservoirs used to generate electricity. The Bureau of Reclamation, which constructs and operates water projects, also can affect state allocation of water. 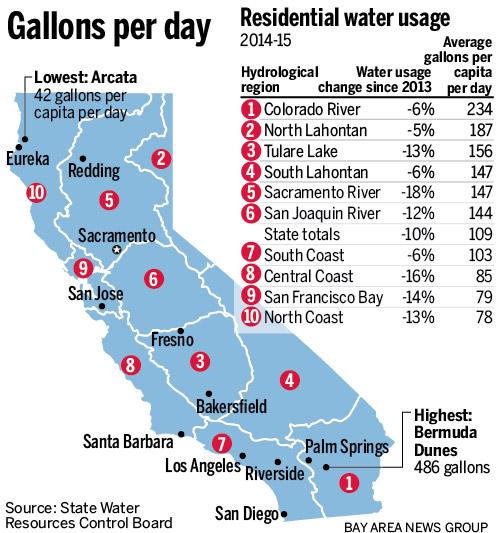 The kind of rights that most farmers have are appropriative rights, which include the act of taking water to a place that would normally not have any water on it. Along with those farms that own riparian rights, these are the most senior rights holders, who also argue their water use should never be restricted.

Unlike land rights, which have clearly defined boundaries, California water rights are extremely complicated and based on a unique hybrid system of rights. Surface water rights can be riparian or appropriative, based on the seniority of the rights, and allocated for a particular type of use.

They can also be subject to curtailment during the draught. Seasonal, geographic, and quantitative differences in precipitation caused California’s system to develop into a unique blend of two very different kinds of rights: riparian and appropriative.

California’s law regarding water rights is huge and complicated. When you purchase real estate in California it may include a water right. Water rights include the use of underground water, such as acquired through a well, and the use of surface water available above ground, such as from creeks, rivers, and lakes.

In California, the state and the federal government own all the water in the state. It is through licenses, permits, contracts, and government approval that individuals and entities are allowed to use the water. Therefore, a water right is not an ownership right, but rather a right to use it.

It is a right to use what the state says is a “reasonable” amount of water for a beneficial purpose. The two common water rights that are recognized under California law are Riparian Rights and Appropriative Rights.

Riparian rights with some exceptions:

An Appropriative Right is basically the removal of water from a surface water source for delivery to non-adjacent (non-riparian) parcels. As with Riparian water rights, the right for the water is based upon a “reasonable and beneficial use”

Appropriative rights with some exceptions:

Trying to purchase any kind of Water right involves jumping through more than a few hoops as you can imagine. When you file a water rights application, you must also pay fees that the Division collects for the Department of Fish and Wildlife. The current fee is $850.00 along with other paperwork and other fees.

Water Footprint Calculator-Water Use in The US-The Wonderful Empire