Hydrogen peroxide is one of the few simple miracle substances still available to the public. Its safety and multiple uses make it an affordable, necessary item to have around the house or prepper Bug-Out-Bag, found in nature in honey and even mother breast milk and considered a miracle product. What is Hydrogen Peroxide made out of?

Hydrogen peroxide is water (H2O) with an extra oxygen atom (H2O2) the extra oxygen is relatively loosely bound, making it a highly reactive chemical that’s eager to oxidize any other molecules around it & comes in diluted strengths:

This solution is often described as being “water but with one more oxygen atom,” a description that can give the incorrect impression that there is a great deal of similarity between the two compounds. It is usually handled as a diluted solution with household grades that are typically 3-6%

Hydrogen peroxide is a chemical compound with the formula H2O2. In its pure form, it is a very pale blue liquid that is slightly more viscous than water. It is used as an antiseptic to kill germs and other reasons for usage.

It’s usually found as a dilute solution (3%–6% by weight) in water for consumer use and in higher concentrations for Industrial use.

Hydrogen peroxide is a reactive oxygen species and the simplest peroxide, a compound having an oxygen–oxygen single bond. It decomposes slowly when exposed to light and rapidly when its in the presence of organic or reactive compounds.

It is typically stored with a stabilizer in a weakly acidic solution in a dark bottle to block light. Hydrogen peroxide is found in biological systems, including the human body. Enzymes that use or decompose hydrogen peroxide are classified as peroxidases.

Hydrogen peroxide should really be called hydrogen dioxide. Its chemical formula is H2O2. It contains one more atom of oxygen than water (H20). The ozone layer that surrounds the earth consists of three atoms of oxygen (03).

This protective layer of ozone is created when ultraviolet light from the sun splits an atmospheric oxygen molecule (02) into two single, unstable oxygen atoms. These single molecules combine with others to form ozone (03).

The ozone isn’t very stable. In fact, it will quickly give up that extra atom of oxygen to falling rainwater to form hydrogen peroxide (H202).

How is Hydrogen Peroxide Made

Hydrogen peroxide is odorless and colorless but not tasteless. When stored under the proper conditions, it is a very stable compound. When kept in the absence of light and contaminants, it breaks down very slowly at the rate of about 10% a year. (This can be slowed even further by storing the liquid in the freezer.) 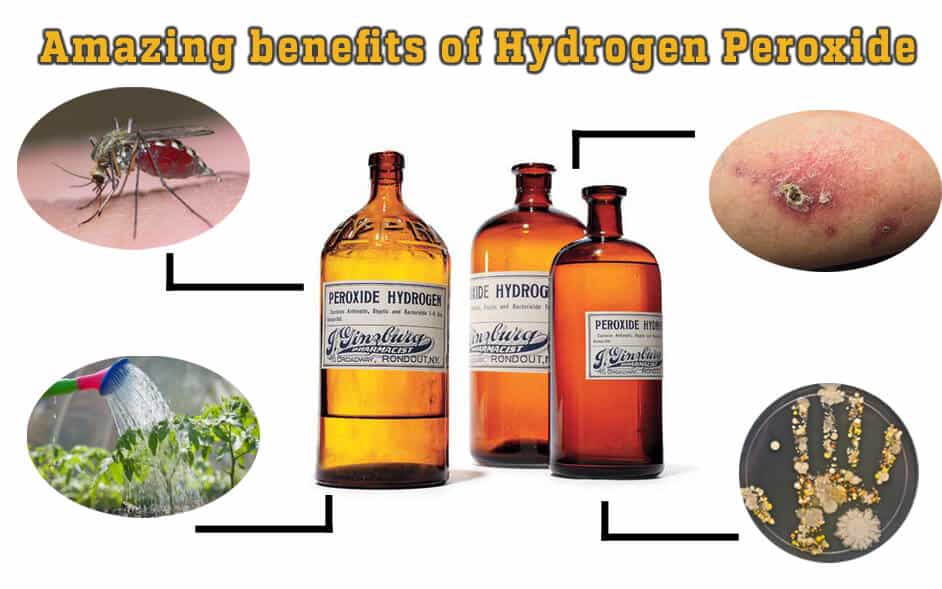 Because hydrogen peroxide is non-toxic and has dozens of uses as an antiseptic for skin, teeth, and ears, it belongs in the prepper’s medicine cabinet. It’s also highly versatile for other
applications, such as cleaning or even helping you get potable water so it belongs under the kitchen bathroom sink, out in the garage, or gardening shed.

Did you know that Hydrogen Peroxide can neutralize skunk odor even better than tomato juice? Tomato juice only masks the problem. You can bathe a pet in a quart of 3% hydrogen peroxide with 1/4 cup baking soda and a teaspoon of liquid detergent. That simple recipe and a five-minute rinse with water will eliminate the stink from the worse skunk.

These are just a few 3% Hydrogen Peroxide uses.

It’s healthier and will also help you save money! Hydrogen peroxide works to remove the type of bacteria which is the real cause of body odor. It kills microorganisms, including germs, by oxidizing them and it can even get rid of infections entirely, such as yeast infections, foot infections, sinus infections, and more.

Hydrogen peroxide can be found at about any store, including the dollar store, making it cheaper to buy and stockpile. The most common type that is used is pharmaceutical grade one. Hydrogen peroxide that is over 3.5% solution should be used cautiously used.