Environmental conditions such as weather, the body of water, the size of your craft, and the weight of the anchor itself are all significant parts of the puzzle of boat anchoring. Anchors come in all shapes and sizes and can be used in deep or very shallow water. What kind of Anchor you need is dependent on variables your boat encounters. What kind of anchor do I need?

When buying a boat, one of the last things an owner thinks about is what kind of anchor they will be using but an Anchor plays an important role in the overall operation of any kind of vessel.  All Boat owners need a functioning anchor onboard their craft for many reasons, but first, let’s see the many types of Anchors and how they work.

How an Anchor Works When an anchor penetrates the surface of the seabed, suction generates resistance, created by the bottom material plus the weight of the material above the anchor. As the boat pulls on the anchor rode, the anchor digs in deeper, creating additional resistance. In rocky bottoms, anchors can’t dig in, but rather snags on protrusions and holds by grabbing on.

Anchors achieve holding power either by “hooking” into the seabed, or mass, or a combination of the two. Permanent moorings use large masses commonly a block or slab of concrete resting on the seabed. The wind will push the boat away from the anchor and keep the chain in place. Most anchors have flukes designed to dig into the ground. If the anchor is in the correct position, it will dig in deeper when wind or waves put pressure on the chain.

There are generally spoken three types of modern anchor designs. The fluke anchor, the plow anchor, and the claw anchor all work by digging into the seabed, unlike older models that grab on rather than dig in.

Anchor selection can be divided into different types like:

Pivoting fluke-style – are the most used and very popular today installed on smaller boats.  Lightweight small and easy to handle, Fluke-style anchors work well in mud and sandy bottoms. 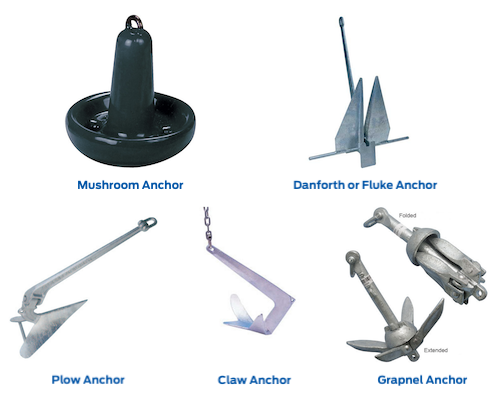 Readily available and easy access to storing these Anchors are very easy to use.

Bruce-type-  is known generically as a “claw type anchor“. Claw-types have the good reputation of not breaking set, quickly in most sea beds and although not an articulated design. They offer a fairly low-holding most power to weight ratio and generally have to be over-sized to compete with other types of anchors. Bruce & Claw Anchor type

Fixed-shank scoop -Designed to set quickly in all types of seabeds, their unique geometry enables them to orient themselves for fast penetration, regardless of how they hit the bottom. They combine a chisel tip, roll-bar, and skids to dig in straight and bury rapidly, typically within one meter, even in thick weed and kelp

Hinged plow– anchor is constructed of high-grade stainless steel for maximum tensile strength.  The hinged shank delivers consistent setting and holding even in the very worst conditions. The Hinged Plow Boat Anchor modeled after the original CQR is one of the most popular anchors among bluewater cruisers. The hinged design, which can rotate over 70 degrees in any one direction, means that it is more responsive to wind and tide changes, making it less likely to unset. The hinged plow anchor performs well in most bottom conditions including mud, rock, and grass. Each anchor includes a trip line at the back of the anchor to allow for an easier breakout.

Grapnel Anchor- is shaped like a grappling hook, the anchor has multiple tines or points, and is designed to grab onto structure on the bottom—such as rocks or submerged timber—rather than sink into the bottom. The tines usually fold up along the shank so that the anchor is more compact for storage. On some models, the tines are designed to bend to make it easier to retrieve the anchor if it becomes snagged on the bottom structure.

River and Lake anchors are designed to snag bottom structures, which makes them good for anchoring in rocky areas. They are often chosen for use on inflatable boats and kayaks because they store compactly and won’t puncture an inflatable. “River and Lake Anchors” as used here refers to light- to medium-weight anchors that are mainly used in relatively calm lakes and slow-moving rivers. These anchors correspond to various styles such as mushroom anchors, river anchors, slip-ring, fluke-style anchors, folding box anchors, folding grapnel anchors, and other anchors such as folding anchors and collapsible anchors. Another type of anchor to consider is one you can use when you go ashore. These include sand spikes and sand anchors.

Shallow water anchors- Many serious anglers choose to install a mount at both locations to prevent their boat from swinging around as the direction of the current or wind changes. Shallow Water Anchors is a simple addition to almost any bass boat, flats boat, kayak, or skiff.

Whatever type of boat you have and the composition of the seabed where you expect to “drop the hook,” one or more of these types of anchors should be good for you. These anchors are made for every type of sea bottom and every size of boat. 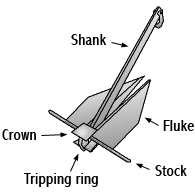 The Rode (also known as anchor cable) is what connects your anchor to the boat. The best Rode assembly is a combination of a length of chain and rope used in conjunction each plays an important beneficial role. Without it, your anchor is not going to do you a world of good.  It is consequently an important part of your tackle and should be a serious consideration. Wave and wind action will cause the boat to move.

If the boat is anchored in storm situations, the movement can be quite violent. As the anchor is hopefully firmly embedded in the seafloor and the other end of the rode securely connected to the pitching boat, this energy must be absorbed by the rode. The energy absorption is referred to as ‘dampening’. This video explains how to assemble a Rode & Anchor Assemble.

What Size Anchor For My Boat

It is recommended that you use a scope of 7:1, meaning that for every foot of water depth, you should use 7 feet of rode. For example, to anchor in 10 feet of water, you would pay out 70 feet of line. Measure the scope as the ratio of the length of the anchor rode to the height of the bow above the bottom. 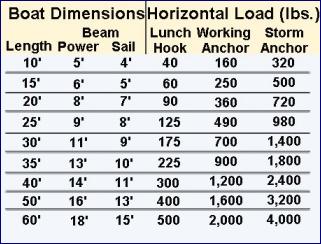 How to Anchor a Boat

Modern anchors have a chain near the anchor followed by a lighter cable or rope up to the vessel. The anchor chain helps give added weight so the anchor can be set with horizontal force to dig in and stay put. The captain should “set” the anchor by applying reverse power to make sure the anchor digs in and won’t go anywhere. The proper setting ensures that the boat actually stays and doesn’t drift off course.

The U.S. Coast Guard recommends five to seven times as much line as the depth of the water plus the distance from the surface of the water to the anchor attachment point. Secure your anchor to the cleat at the point of the line where you will want it to stop. From there, point your boat heading into the wind or current, whichever is stronger.

Environmental conditions such as weather, the body of water, the size of your craft, and the weight of the anchor itself are all significant parts of the puzzle of boat anchoring. More important than anything else, if you should lose power, it’s the anchor that’s going to keep your boat from drifting into peril. It could be the most critical tool in the boat but the least thought about.

The Anchor Rode – Making the Connection

link to How to Test Pool Water

Continue Reading
link to What Causes High pH in Pools

Water pH is a measure of the acidity of water tested and is the most routine pool water test along with chlorine residual that a pool operator will perform at the very least every day of the week. ...