When you flush the toilet in your home most people know where it ends up through the miles of underground pipe to be cleaned and sent to area rivers or streams but if you are thousands of feet above the earth in an Airplane and there are up to 400 passengers on board where would the Airlines put that? Where Does Airplane Waste Go?

From the Planes bathroom, waste travels through pipes to the rear of the plane & remains in a tank that can only be accessed from the exterior of the plane, pilots can’t clear the tanks during the flight. The tank is emptied by a special service Septic truck once the plane lands at its destination.

Take the fascinating journey of a passenger’s trip to a Planes bathroom and where the waste goes after a flush on a 747 airplane to its final destination and you thought they just dump it!

Airplane bathrooms have come a long way since the earlier days of aviation. At the dawn of aviation, using the bathroom included a bucket for doing your business and a separate urinal that went overboard.

Military planes up through the 1930s proved little better. Many of them had slits in the toilet bowl. These slits allowed the contents to dump right into the atmosphere. There was even a 1936 British Royal Air Force model that dumped waste into the sky via a pipe. The pipe was nicknamed the Whistling Sh___ House.

On an average long  747 airline flight, that seats approximately 416, a passenger uses the bathroom 2.4 times in the air, producing 230 gallons of waste. These toilets in the airline besides making a huge noise you’ll notice that there’s no water in the bowl. Toilets on the ground, like the one in your bathroom, use siphons to flush water that enters the siphon and drains via gravity to a sewage system or septic tank.

But bathrooms on aircraft can’t be built using siphons because water can’t sit in a bowl on a plane because of the possibility of spillage. Before the modern aircraft toilets onboard today, spilling used to be a serious problem for passengers when slosh buckets and bottles were the norms though there was no flush required, at least. James Kemper invented a  modern toilet to work with aviation needs, patenting the vacuum toilet in 1975.

His invention was installed on Boeing planes by 1982, remedying the problems that the siphon toilet couldn’t handle, like spillage. Plus, vacuum toilets use a lot less water than siphon toilets and are much lighter, and can be installed in a number of ways, making them more efficient in terms of fuel and space, two things of critical importance to airlines.

What Is Blue Ice

James Kemper added a nonstick toilet bowl that uses a “Blue Juice” substance known as Skykem to replace water and powerful vacuum suction that left little to nothing behind. Skykem the main ingredient in the Blue Ice aids in killing odors and disinfecting the bowl. But, it also can freeze if it comes in contact with air.

Airline Blue Ice is frozen Blue Juice or sewage material that has leaked mid-flight from commercial aircraft lavatory waste systems. It is a mixture of human biowaste and liquid disinfectant that freezes at high altitudes. The name comes from the blue color of the disinfectant.

If you’re like me you dread the fact that you may have to use the lavatory on an airline and have made it through flights without the need, there may come a time, it can enter the realm of an emergency, and when you gotta go. The first thing you need to do is to familiarize yourself with entering the bathroom to get to the toilet. 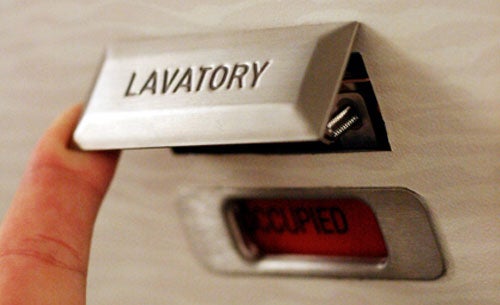 There have been some horror stories about flushing an Airplane toilet while in-flight but they are de-bunked. You can get stuck, but only if your body forms a perfect seal on the vacuum toilet. This is difficult to do. Adam Savage of “Mythbusters” tried it out, and despite serious suction, got up without a problem. But it’s still probably a good idea to stand before flushing.

A fat person on an airline toilet has intestines sucked out due to a vacuum. Numerous searches of the National Library of Medicine found nothing to confirm that a vacuum airplane toilet had caused evisceration. Though apparently, you can get stuck on the toilet.

How Do Airplanes Dispose Of Toilet Waste

From the lavatory, in the airline, the waste travels through the plane’s pipes to the rear of the plane and remains in a tank that can only be accessed from the exterior of the plane. The pilots can’t clear the tanks during the flight. The tank is emptied by the Airline’s special service trucks once the plane has landed on the ground.

The sewer trucks attach a hose to the aircraft, and it sucks out the waste into the truck from the sewage tasks on the plane. After the plane’s tank is emptied, another hose is attached to both vehicles to clean the tank using a disinfecting product. Much like a Porta Pottie is emptied at a Campground.