Recognized as America’s longest river, the Missouri River is known as the “Center of Life” in the Great Plains. From agriculture to food, this winding waterway plays a major role for those who live close to the river and plays a historic, important economic part in the building of America and opening of the West frontier.  Where does the Missouri River Begin and End?

The Missouri River a tributary of the Mississippi begins in Three Forks, Montana, as the confluence of 3 major rivers, Madison, Jefferson & Gallatin & ends in St. Louis, Missouri. Crossing South Dakota, North Dakota, Nebraska, Iowa, Colorado, Kansas, & at 2,540 mi. is the longest river in the US.

The Missouri River has been used long before Lewis and Clark recorded their expeditions by American and European fur traders and trappers along with the Indians that lived on the river and territory that surrounded it.

How Did the Missouri River Get Its Name

In 1673, Father Jacques Marquette and explorer Louis Joliet traveled down the Mississippi River. When they reached another river that came from the northwest, Father Marquette noted on his map that a large tribe of native people called the OuMissouri tribe meaning”people with big canoes” people who lived upstream called the river Ouemessourita.

The mighty river which flowed into the Mississippi eventually was named after the tribe that lived along its banks. It became the Missouri River. Later, when settlers came, the area became known as the Missouri Territory and in 1821, when the territory became a state, it adopted the name Missouri.

How Long is the Missouri River The Missouri River which is a tributary of the Mississippi River, the Missouri River, at 2,540 miles in length, is the longest river in the United States. The river played an important part in the explorations and expansion of the American West.

The Start of the Missouri river derives from headwaters high in the Rocky Mountains near Three Forks, Montana at an elevation of 4,045 feet, beginning at the confluence of the Jefferson and Madison Rivers, and joined about ½  mile downstream by the Gallatin River. It is known as the Missouri Breaks.

It continues to flow from Montana southeast through the Missouri River Basin through North Dakota, South Dakota, and Nebraska into Missouri, where it meets up with the Mississippi River just north of St. Louis Missouri.

It drains at a watershed with a size of over 529,000 square miles. Its catchment is equal to 1/6 of the United States and 5% of North America. It is similar to the size of Quebec in Canada. In early 1803 the US began negotiations with the French government with the intentions to buy the Port of New Orleans but ended up with all of the lands between the Mississippi and the Missouri River’s headwaters, in what is known as the Louisiana Purchase. This huge amount of land included 828,800 square miles and opened up our country to the expansion that would take place to the American West.

Under President Thomas Jefferson an amount of $2,500 dollars was allotted to a small US Army unit to take the trip to explore the Western frontier all the way to the West Coast and the Pacific Ocean.

On May 14, 1803, Lewis and Clark left St. Louis, Missouri with 45 men, a 55-foot keelboat, and two large canoes making their way up the Missouri River to its headwaters for the first time. They were able in a few short months reach the headwaters of the Missouri River, at the confluence of the Jefferson, Madison, and Gallatin Rivers on July 28, 1805. Meriwether Lewis would document the entire trip keeping a daily journal.

The 3 streams that make up the headwaters of the Missouri River were named by Lewis and Clark after the President of the United States and the Secretaries of the Treasury and state.

What States Does the Missouri River Run Through 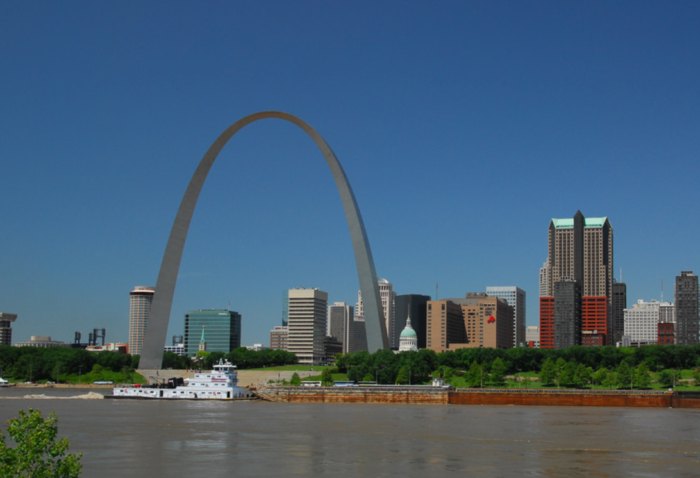 If you have ever flown over St. Louis Missouri over the great Archway you can see the 2 great rivers meeting together to form one. It’s quite a few and most of the time the Missippi river’s delta is brown with silt. People make the entire trip of the Missouri River by motorboat, canoe, and kyack. Camping and fishing on the banks and sharing video on the internet.

The Upper Missouri River Breaks National Monument is a national monument in the western United States, protecting the Missouri Breaks of north-central Montana. Managed by the Bureau of Land Management, it is a series of badland areas characterized by rock outcroppings, steep bluffs, and grassy plains; a topography referred to as “The Breaks” by locals. It is a majestic beautiful landscape that covers 350,000 acres in central Montana.

The White Cliff landscape throughout this monument contains a spectacular array of biological, scientific, historic, wildlife, ecological, and cultural resources mixed with a remote location that offers opportunities for solitude not commonly found today. This area contains antelope and mule deer monuments as well as important spawning habitat for the endangered pallid sturgeon. Long before the time of Lewis and Clark, the area was inhabited by numerous native tribes, including the Blackfeet, Assiniboine, Gros Ventre (Atsina), Crow, Plains Cree, and Plains Ojibwa.

A Great American River besides the Missouri river is the Colorado River, known as the Lifeblood of the American Southwest. Its power provided by the amount of water flowing through it and the area it covers all allows for it to be used for many purposes including irrigation, a water source, and a source of Hydroelectric power for the town and cities all along the way. For more information on the Colorado River check out the article here on MyWaterEarth&Sky called Where does the Colorado River Begin and End?

All along the Missouri River, there are over 95 large tributaries. Below are some of the main affluents that make up the length of the river:

The Missouri River became the jumping-off point for all of the major trails that opened the American West, including the California, Mormon, Oregon, and Santa Fe Trails, as well as the Pony Express at St. Joseph, Missouri.

The first bridge built across Mighty Missouri was the Hannibal Bridge in Kansas City in 1869. Soon, paddle steamers began to move up the river, helping to facilitate settlement in the Dakotas and Montana. The northernmost navigable point on Missouri before extensive navigation improvements was at Fort Benton, Montana.

The Missouri River played an important role in facilitating the early years of American and European Fur Trading and Fur transportation.

The Paddle Steamboat filled the mode of transportation on the river into the 1800s.

In the last 70 years or more US Congress has spearheaded an intensive plan for water resource management and flood control in the Missouri River constructing 100’s reservoirs and dams along the river that minimize flooding and add irrigation to farms and Drinking Water to towns and communities along the way.

Considered the greatest American river that took this country from infancy through the industrial revolution is the Mississippi River. Check out this article at MyWaterEarth&Sky called Where Does The Mississippi River Start and End