The Snake River runs more than a thousand miles connecting the Pacific Northwest and was once considered one of the most bountiful rivers in the U.S with salmon, clean water, and healthy habitats for wildlife but is now under watch as one of America’s top endangered rivers. Where does the snake river begin and end?

The Snake River originates in parts of Yellowstone & Grand Teton National Parks in Wyoming and runs across southern Idaho before turning north climbing in elevation along the Idaho-Oregon border then diving in elevation turning west as it enters Washington State and flows into the Columbia River.

The Lewis and Clark Expedition 1804–06 was the first American group to cross the Rocky Mountains and sail down the Snake and Columbia Rivers to the Pacific Ocean. These are some of the most scenic and beautiful spots in North America.

Headwaters of the Snake River

The Snake River is a major tributary of the Columbia River and has its headwaters just inside Yellowstone on the Two Ocean Plateau. Various stretches of this important river have had at least 15 different names. The name, which comes from the Snake Shoshone Indians, was applied to the river as early as 1812, making it one of the oldest place names in the park.

The Snake River likely derived its name from the early European explorers who misinterpreted the sign made by the Shoshone people who communicated in sign language by moving their hand in a swimming motion which appeared to these explorers to be a “snake.” 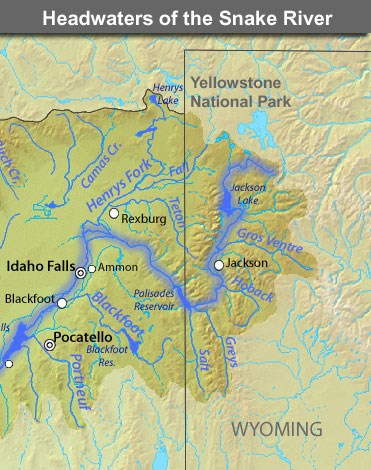 It actually signified that they lived near the river with many fish. In the 1950s, the name “Hells Canyon” was borrowed from Hells Canyon Creek, which enters the river near Hells Canyon Dam.

The Snake River Headwaters encompasses parts of Yellowstone and Grand Teton National Parks, the John D. Rockefeller Memorial Parkway, and the Bridger-Teton National Forest. The river lies at the heart of the Greater Yellowstone Area (GYA), often referred to as one of the last intact functioning temperate ecosystems on earth

Rivers including the Snake River protected by Congress by the Headwaters Legacy Act of 2009 (PL 111-11) are among the most pristine in the nation. They have many outstandingly remarkable values and offer myriad recreational opportunities. according to USDA Forestry Service

The upper Snake River is used mostly for Irrigation and Hydroelectric power. The main flow is regulated by a series of Dams and Reservoirs the biggest being the American Fall Dam and Reservoir. the rugged Hells Canyon at the Oregon–Idaho border, and the rolling Palouse Hills of Washington, before emptying into the Columbia River at the Tri-Cities in the Columbia Basin of Eastern Washington.

Where Does the Snake River End

Turning north, it forms the boundary between Idaho and Oregon for 216 miles. From the northeastern corner of Oregon, it forms the Washington-Idaho boundary to Lewiston, Idaho, and then turns west to join the Columbia just south of Pasco, Washington, after a course of 1,040 miles.

Runoff from the states of Wyoming, Utah, Nevada, Idaho, Oregon, and Washington combines and empties in the Snake River, which has a drainage basin of some 109,000 square miles. From elevations of 10,000 feet, the river descends to 300 feet at its outflow into the Columbia River.

This map shows how the Snake River(Yellow) winds its way through each state moving west and then north climbing then diving in elevation taking numerous tributaries and runoffs before joining the Columbia River(Blue) which empties into the Pacific Ocean.

Snake River has 27 dams and reservoirs with a total active capacity of approximately 6.8 million acre-feet, providing water to 83,000 farmers and more than 30,000 farms. Six powerplants provide 821,870-megawatt-hours of electricity annually.

The four Snake River dams on the lower Snake in southeast Washington were completed in the 1960s and 1970s. Lower Granite Dam is located approximately 40-miles downstream of Lewiston, Idaho. Further downstream are Little Goose Dam, Lower Monumental Dam, and Ice Harbor Dam. These four Dams are the main ones in question believed to be hampering the migration of young salmon headed out to sea,

Dams and reservoirs from the Snake have an effect on the natural salmon runs that take place in the upper parts of the Snake River throughout the Columbia River where migratory salmon make their way to the ocean and back. The Dams were built and operated for good reasons like transportation but a lot of people now feel that they are inadequate and antiquated and are only hurting salmon migration which also affects the Columbia River. There are movements to take them down.

link to Pool Pump Not Turning On

It's common for swimming pool motors to run on the hot side. Most motors will shut themselves down if it is running too hot. Pool pump motors that run hot will draw more amperage and cost more money...

Drinking-Water Fountains have been slowly disappearing around city parks, schools, businesses, and hospitals but could be making a come back, especially when they have Bottle Refill Stations ensuring...