After nearly six days lodged aground in the Suez Canal, the cargo ship Ever Given was finally freed Monday 03/29/21, according to news agencies and the ship tracker Vessel Finder. Traffic in the waterway can now resume. The construction of the Suez Canal was an important part of history and is still a critical part of the world’s economy costing billions during its closing. What country owns the Suez Canal?

In 1962, Egypt made its final payments for the canal to the Suez Canal Company who were the previous owner-operators, taking full control, and now is 100% maintained by the state-owned Suez Canal Authority (SCA) of Egypt.

The tumultuous history of the Suez Canal showed how important it was and still is. Shipping analysts estimated that this traffic jam caused by the Japanese ship Ever Given had held up nearly $10 billion in trade every day. A few accidental groundings of vessels have closed the canal since then. The most notable, until this week, was a three-day shutdown in 2004 when a Russian oil tanker ran aground. But the real story of the Suez Canal is its history.

Who Built The Suez Canal

The canal, originally owned by French investors, was conceived when Egypt was under the control of the Ottoman Empire in the mid-19th century.  An estimated 1.4 million workers help construct it. In 1854, Ferdinand de Lesseps, who was the former French consulate to Cairo, secured an agreement with the Ottoman governor of Egypt to build a canal 100 miles across the Isthmus of Suez. An international team of engineers drew up a construction plan, and in 1856 the Suez Canal Company was formed and granted the right to operate the canal for 99 years after completion of the work.

Construction of the Suez Canal began in April 1859, early on digging was done by hand using picks and shovels wielded by forced laborers. Later, European workers with dredgers and steam shovels arrived at the construction site. Labor disputes and a cholera epidemic slowed construction, and the Suez Canal was not completed until 1869 nearly 4 years behind schedule.

Major improvements were made to the Suez Canal in 1876 making the Suez Canal the most heavily traveled shipping lanes in the world.  In 1875, Great Britain became the largest shareholder in the Suez Canal Company when it bought up the stock from the new Ottoman governor of Egypt, then eventually took charge of the Canal after invading Egypt in 1882.

After years of occupation, Great Britain created the Anglo-Egyptian treaty of 1936 made Egypt virtually independent, but Britain kept the rights for the protection of the canal.

After WWll and under pressure from the United Nations, Britain and France withdrew in December, and Israeli forces departed in March 1957. That month, Egypt took full control of the canal and reopened it to commercial shipping. Around 10 years later, Egypt shut the Canal down during the Six-Day War and Israel’s occupation of the Sinai Peninsula. In 1975, Egyptian President Anwar el-Sadat reopened the Suez Canal as a gesture of peace after talks with Israel. Today, dozens of ships navigate the canal daily, carrying more than 300 million tons of goods a year.

How many times have you driven past the Wastewater Treatment Plant and held your breath and say to yourself how can anybody work there, well I did. Wastewater treatment facilities involve natural, chemical, and physical processes that allow for development and growth. Read my article here on MyWaterEarth&Sky called What are the 3 Stages of Wastewater Treatment?

Where is the Suez Canal Located 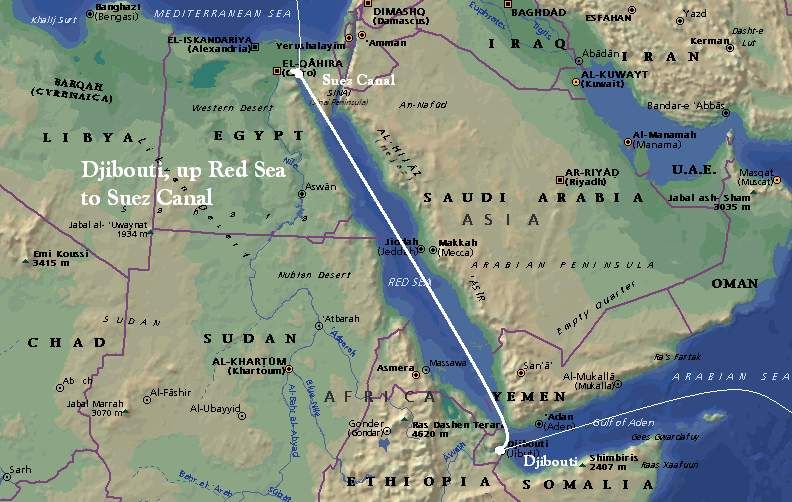 Suez is situated at the southern entrance of the Suez Canal, where the canal leads into the Gulf of Suez, the northern end of the Red Sea. The Suez Canal is an artificial waterway that transits through Egypt and opens out into the Mediterranean Sea near Port Said. The port of Suez with its extensive port facilities serves ships and vessels traveling to and from the canal.

After years of working in the Water and Utility business for state and government agencies, I learned a few things about local governments, budgets, planning, and infrastructure. For one, the favorite saying when I was an employee was, out of sight out of mind. Read this article on MyWaterEarth&Sky called The Components of Economic Infrastructure

Why is the Suez Canal Important

Without the Suez Canal, shipping ships traveling between those parts of the world would have to go around the entire continent of Africa, adding hefty costs and substantially extending their journey times.
A solution to that problem appeared elusive for centuries until the precious 120-mile waterway was constructed to slither down Egypt and into the Red Sea. This miracle of sorts was only possible because the Mediterranean and Red Seas were found to be roughly level in altitude. The journey is shown in the video below.
The time saved by the passage is almost invaluable. Today, a ship traveling from a port in Italy to India, for instance, would cover around 4,400 nautical miles if it passed through the Suez Canal a journey that, at a speed of 20 knots, would take about nine days.
But the second-quickest way to complete that same journey would be via the Cape of Good Hope and around Africa. At the same speed, it would take three weeks to traverse the route, which is 10,500 nautical miles long. That’s how important the Suez Canal is.
https://youtu.be/L0J-VIvKLsc

There are many waterfront homes that require a Bulkhead. I come from a bay area called Mystic Island in New Jersey where the houses are built on lagoons and require them. After years of use, the wooden Bulkheads break down and a homeowner is left with an expensive choice, replace them with Wood or Vinyl. Read the article here on MyWaterEarth&Sky called  What’s the difference between a Vinyl and a Wooden Waterfront Bulkhead?

References:  New York Times-What to Know About the Suez Canal and the Cargo Ship That Was Stuck There