If you have ever been to a fish market or caught your own fish, you will already know that most fish have scales, you know, those plastic flakes that cover their body that tend to make a mess and are soo difficult to remove. Why Do Fish Have Scales?

Fish scales act like armor protecting fish from scrapes on rocks & branches protecting the fish from injury, & shielding fish from predators. Scales provide defense against parasites. They make fish more aerodynamic & help them move through the water faster up, down, or sideways without changing speed.

The scales of a fish contain a variety of pigments that can give the fish different types of colors. The scales form rows along the lateral line of the fish and help in detecting vibrations in the water as it acts as sensory receptor.

Do All Fish Have Scales

No. Many species of fish lack scales. Fish that do not have scales include catfish, sharks, rays, chimeras, skates, moray eels, sturgeons, paddlefishes, sailfin blennies, combtooth blennies, hagfishes, and lampreys. Many of these fish have evolved scale alternatives.

Scales are more than just fish skin and serve several purposes. depending on where the fish’s environment is, scales serve a purpose and developed over generations of the species of fish. Scales act almost like armor protecting the fish from predators, and scrapes on rocks and branches.

Scales allow easy movement up, down, or sideways without changing speed. Sharks will typically use their scales to help them quickly change direction by reducing drag. The arrangement of scales on the body of the fish can also help tell the age of that type of fish.

All fish have a slime coat secreted from under the scales. It also protects against infection and parasites. Some fish have a toxic slime layer, another defense against predators.

Fish sometimes lose their scales and usually do grow back. Fish that have sustained minor trauma, will grow their scales back fairly quickly. While the damaged area is unprotected, the fish is more vulnerable to disease, fungus, and parasites.

There are four main kinds of scales and numerous variations of each kind. 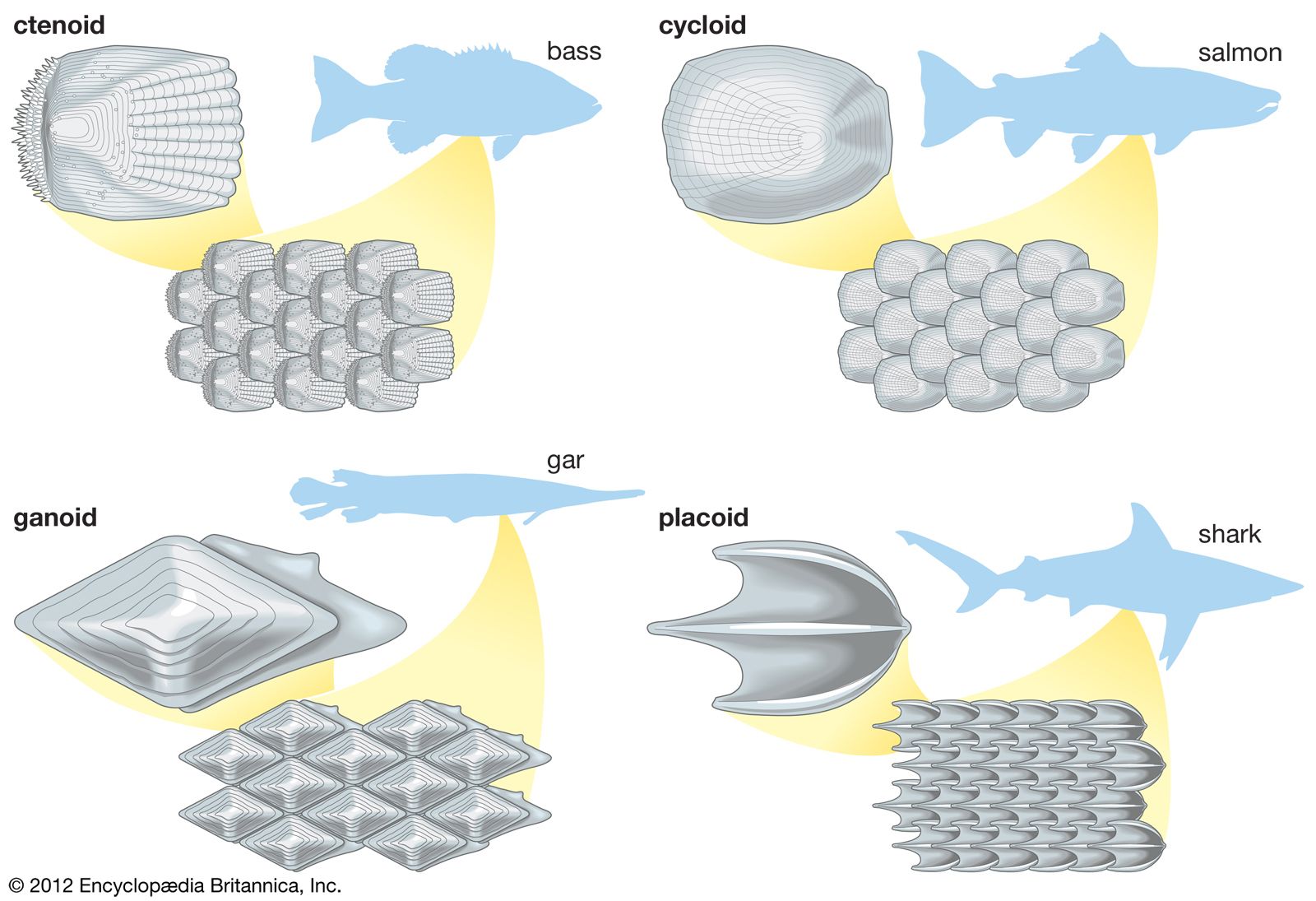 Placoid (sharks and rays)-Placoid scales are usually flattened rectangular shapes. They can be found on sharks and rays. These scales don’t change in size as the fish grows. New scales grow in to fill up the empty space.

Cosmid (lungfishes and some fossil fishes)-Cosmoid scales are very similar to placoid scales in shape and size. They are usually found on fossil fish as well as lungfish. These strong scales consist of two layers of bone, a layer of dentine, and a final layer of vitrodentine. This is not a scale that would be fun to bite down on.

Ganoid (bichirs, Bowfin, paddlefishes, gars, sturgeons)-Ganoid scales take on the shape of a rhomboid and articulating peg and socket joints in between them. These can be found on a wide variety of fish such as sturgeons, bowfin, and paddlefish just to name a few.

Can You Eat Fish Scales

Yes, fish scales are edible. That doesn’t mean you’re going to want to eat them though it’s more an acquired taste. Scales are made in the mesoderm. This means that the way scales grow is closer to bones or teeth than reptile scales.

Kosher dietary laws prohibit the eating of fish without eating both scales and fins. People that eat salmon will often eat the fish with the skin on the fish that is rich in nutrients like omega 3. They are also known to have a healthy dosage of collagen in them which is used especially in health foods pharmaceutical and processing industries.

Normally people that enjoy eating the skin of fish will often descale the fish before cooking it. The best way to remove scales from any fish is to boil them in water for a few minutes, then drain the water and rinse them with cold water. You can also use a vegetable peeler to peel off the skin, but be careful not to use too much force, as it can damage delicate scales and make a mess.

You can also cook the fish first with the scales and skin still attached. After your fish is done, remove the skin. The fish skin will be loosened by the heat and you can cut it off pretty easily. The scales will come off with the skin.

How to Match the Hatch

For more great information on Fishing and all topics, H2o stay right here on MyWaterEarth&Sky-If you have ever been to a fish market or caught your own fish, you will already know that most fish have scales, you know, those plastic flakes that cover …………..… Continue reading

What Is Included in a List of Fish Without Scales?