Through the last few decades, the subject of infrastructure has come up many times, and how towns, and cities here in the US and abroad will be able to find a solution to this expensive and complicated problem, with some local governments, the clock is ticking. Selling aging water systems could be the answer.  What is Water Privatization?

The need to channel water supplies from distant sources was an outcome of the growth of urban communities and among the most notable ancient water-conveyance systems are aqueducts built throughout the Roman Empire.

What is a Water System

Water Systems include facilities for the collection, treatment, storage, and distribution of water wells, storage reservoirs, canals, and aqueducts, along with a distribution system. Today’s reservoirs are formed usually by constructing dams near the collection point of mountain-water runoff or across rivers.

After the water reaches collection points, it is collected and treated to improve its quality. The treated water is then pumped either directly into a city or town’s distribution system or to an elevated storage location, such as a water tank.

A water system that is safe and readily available drinking water is key to public health. Community water systems and water safety plans (WSP) are important ways to ensure the health of a community and access to drinking water. In all cases, the water must fulfill both quality and quantity requirements.

The function is to provide users with a potable water supply with a sufficient pressure level. A community water system (CWS) supplies water to the same population year-round.  Water supply systems are intricately linked with the economic well-being, security, and social fabric of the communities.

In many places, cities, towns, and communities lack the capacity to effectively adapt their current systems for water quality, sanitation, and hygiene to the community’s changing needs eventually as the population grows.

Collection, transmission, treatment, storage, and distribution of water for homes, commercial establishments, industry, and irrigation, as well as for such public needs as firefighting and street flushing

Includes a source, means, or process of supplying water for a community usually including reservoirs aquifers, or some water supply along with tunnels, and pipelines to deliver it.

According to the National Association of Water Companies (NAWC), more than 2,000 facilities operate in Public-Private partnership contract arrangements here in the United States. Big companies can come in absorbing debt created by the aging infrastructure relieving cities that are in over their head. These are the most common Privatization partnership agreements here in the states and around the world. 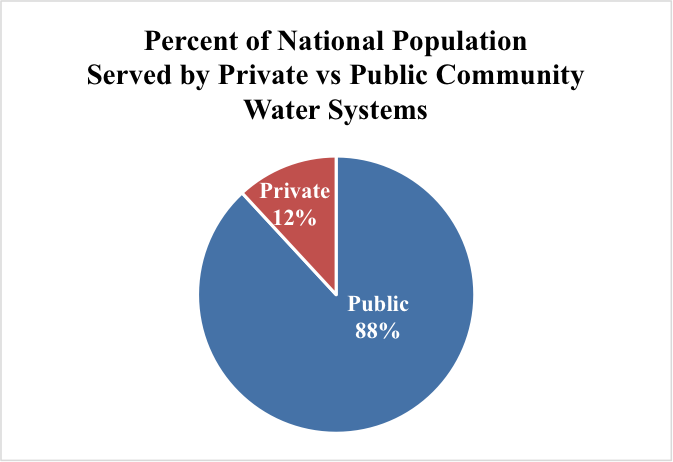 They involve collaboration between a government agency and a private-sector company that can be used to finance, build, and operate projects for the Water system or other

Although Publicly Owned-water systems are predominant today, privately owned water systems are not uncommon, and mixed public-private water systems remain common in some countries.  In France, a combination of public ownership of water systems with private management of the systems’ operation has existed since the mid-19th century.

According to the National Association of Water Companies (NAWC), more than 2,000 facilities operate in Public-Private Partnership contract arrangements. This kind of partnership is happening all over in places like:

More and more countries like Russia, China Malaysia, and Algiers used a series of mixed-model privatization with Public-Private Partnerships instead of full Public-Public or full Privatization agreement contracts.

In bigger cities, governments have entered into complete contracts and Public-Public Partnerships relieving themselves of responsibilities and expenses. Additionally, Public-Public Partnerships between public water utilities and the public employee unions that operate the systems have worked well in the United States. These joint utility-worker partnerships engage worker expertise to increase system efficiency and reduce costs.

There has been a great debate when it comes to Water Privatization since the 1990s when it was first used. In America, public water systems are usually run as a non-profit entity managed by elected or appointed local or state government boards for which rates are set.

Private systems, on the other hand, can be run as profit systems managed by investors or shareholders. Even though rates are monitored by a state’s public commission, private systems are not necessarily subject to this regulating board. Privatization can relieve a community of huge amounts of money from engineering and construction fees that could be used for other roads, hospitals, bridges, and other infrastructure.

Then again, a Water System is a valuable asset controlled by the community but is it all worth it, especially if there is an offer on the table?

There is a decision to make whether to hand over what is a valuable asset that is connected to most communities across this country and others or hold on to it and find a solution to revitalize the aging infrastructure’s pipes, pump stations, towers, and treatment plants.

This article called The War Over Public Water in Pennsylvania where this author is from explains the bipartisan feelings of small-town America and how the subject of Water Privatization and the involvement of big corporations affects communities that have always been self-sufficient in the management of their own town.

The main complaint of Water Privatization is the rise in the cost of rates and connection fees that are normally controlled by a water board made up of neighbors who ultimately have no advantage and see no profits by raising prices for a company that is a non-profit. That could all change when a private corporate company takes over a water system or a maintenance program for potholes. It won’t matter.

I was involved in town and county water & sewer utility companies for many years and have my own opinion that’s based on 30 years of experience working in a community where profit was not an issue, the most important thing that mattered was the township’s million-dollar bonds were appropriated for future improvements to the system.

The town had a freshwater Aquifer and Water treatment plant along with a Sewage Treatment plant 10 miles from the service area. They both have been closed down for regionalization purposes in the last 20 years in a deal with Philadelphia that was 15 miles away.

Utilities like the pump stations, water, and sewer lines, and water tower are still maintained by a skeleton crew of a half dozen staff from the original company. When I was hired in 1974 there was 40 staff counting the girls in the office.

They had a neighborhood vibe and feel. Employees were hired from the area and board members were appointed from the water and sewer service area. Local high school kids painted pump stations and cut grass on summer vacation. A college education could even be paid for by the company if you were an employee for a few years.

At the same time, if Mrs. Jones or any neighbor in our community needed 20 dollars to keep her water from being shut off, utility workers were bonded so we could collect money from her or others (normally us) so that we were capable of paying her bill and keep her water on.

The biggest loss that comes with Privatization besides the sense that water belongs to everyone on earth to manage and maintain, would be to me the sense of community that would be traded for the price of a gallon.

Villages and towns have been built on the edge of the water for a thousand years which lead to the creation of the Water & Sewer Companies so that communities could thrive and grow. Whether that time is still needed should be up to the folks who live there.

For more great articles like these and anything related to the topic of water stays right here at MyWaterEarth&Sky-The planners and builders that built American towns and cities after World War II were innovators who had the foresight to create working mechanically structured grids, laid out with the ………… Continue reading