Algal blooms are one common source of thick sea foams. When large blooms of algae decay offshore, great amounts of decaying algal matter often wash ashore. Foam forms as this organic matter are churned up by the surf. Is Sea Foam Dangerous?

Most sea foam is not harmful to humans and is just an indicator of an over-productive ocean ecosystem. But when large harmful algal blooms decay near shore, it can create an aerosol that can irritate the eyes of beachgoers & poses a health risk for those with asthma or other respiratory conditions.

The Sea Foam may not be toxic, but when the weather gets completely out of control, the churning of the water creates a dangerous situation. Like In the winter of 2020, a King Tide in Washington State with 25-foot waves created a “blender effect” that churned up Sea Foam as high as a man’s chest. Later that spring and halfway around the world, so much Sea Foam appeared in the Netherlands that killed five very experienced surfers.  Emergency personnel looks for survivors in the feature picture for this article.

What Is Sea Foam Made From

The water in the ocean is made up of  2.5 % salt and 96.5 % water which leaves 1% of the mysterious ingredients that are involved with a phenomenon. that’s known as  Sea Foam.

According to the National Oceanic and Atmospheric Administration (NOAA), Sea Foam is a mixturte of “proteins, fats, dead algae, detergents and other pollutants,” plus other bits of organic and inorganic matter. When these particles get agitated by wind and waves, they froth. You can create the same effect by putting some sea water in a bottle and shaking it.

The bubbles happen because of molecules called Surfactants (Surfactants are molecules that spontaneously bond with each other to form sealed bubbles). which they explains are “sticky molecules that cling to the surface between water and air.” These surfactants can come from natural sources, like algae and seaweed, or from human pollution, like fertilizers, detergents and sewage. If you shake this glass of ocean water vigorously, small bubbles will form on the surface of the liquid. Foam forms as this organic matter is churned up by the surf.

it’s called a surface acting agent that is capable of reducing the surface tension of a liquid that is typically Organic compound having a hydrophilic head and a hydrophobic tail. One end of the molecule is hydrophobic – it repels water. The other end is hydrophilic – it attracts water. These molecules make a shape formed like a sphere, with the hydrophobic ends on the inside and the hydrophilic ends pointing outward. These Spheres even if they aren’t perfect make bubbles. And a lot of bubbles make Sea Foam!

Examples of Surfactants when you wash your hands with soap the soap molecules act like mediators between the water and the oil on your skin. It bonds with both of them at the same time. When you rinse off the soap carries off the dirt and germs with the water. So any kind of soaps that you use to clean any household items are considered Surfactants.

In nature, these Surfactants can come from natural sources that end up in a mixture of seawater,  like algae and seaweed, or from human pollution, like fertilizers, detergents, and sewage. Algal blooms that are very common in lakes streams and rivers are thick sea foams. When large blooms of algae decay offshore, great amounts of decaying algal matter often wash ashore from tidal and wave action caused by winds. They are various colors like red-brown or white depending on decaying organic materials in the mixture.

River Foam can appear on rivers’ shallows and banks on a smaller scale than Sea Foam which accumulates on Ocean beaches and surf. The presence of River Foam is not necessarily an indication of water pollution. Foam in the water is often associated with the natural systems happening in the environment Foam can occur naturally when the physical characteristics of water are altered by the presence of organic material in the water. Foam can be white color but generally turns brown over time. 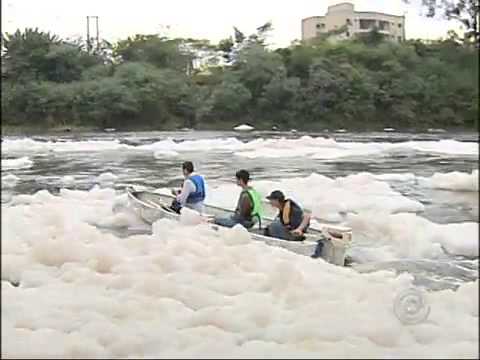 The green, red, brown, or reddish colors that form in River Foam just as in Ocean Foam are often due to phytoplankton, also known as algae blooms, which is a natural phenomenon. These tiny organisms release toxins that aren’t good for you, your dog, the birds, or anything, really. The toxins can irritate the eyes and ears, and even the respiratory system. How bad the River Foam gets is based on how turbulent the water on the River can get. Generally, It’s not as bad as Ocean Foam can get.

If you spend enough time outdoors you may see foaming that happens on a windswept lake or a fast-flowing stream and more at different times of the year. During Autumn when leaves and weeds fall from the trees around a stream and the temperature gets warmer decaying whatever is in the water. Or in the spring when organic material is releasing nutrients from old material that is decaying. On the flip side it Foam can also be a sign of nutrient loading robbing water of oxygen or industrial pollutants that have contaminated the water.

Nutrients that are found as a result of wastewater plants can be added too fast to a stream and the result would be an Algae bloom that would use up then deplete the oxygen in the receiving stream killing aquatic organisms and fish who all share the same ecosystem.