With the onslaught in recent years of the Asian Carp invasion and the threat, they pose to other natural habitats of American lakes and stream the sport of Bowfishing has become hugely popular. This sport is a mixture of archery and fishing harvesting fish in a fun exciting way easy for beginners that can learn fast and another way for people to get into the great outdoors. What is Bowfishing?

Bowfishing the taking of fish with a bow and arrow, or a crossbow, is a specialized sport gaining interest and participation in both fresh and marine waters. It is one of the fastest-growing outdoor recreational sports mixing the sport of fishing hunting and archery

I remember Bowfishing when I was a kid for Carp in the creeks here in Pennsylvania. When Carp were breeding in this neck of the woods they were thick in the water. You could use your Bow to shoot and catch them. Now it’s gaining popularity as a sport in lakes, streams, and salt and fresh waterways across the world.

Bowfishing is a mix of the sports of Archery and Fishing. Targeting non-native fish like the notorious Snake Fish and Alligators from the swamps of the everglades to the Great Lakes regions, Bowfishing is making a comeback.  The technique of hunting fish with a bow and arrow is called Bowfishing or archery fishing. Bowfishing combines the thrill of hunting with the skill of archery and the sport of fishing.

Using a Bow and Arrow to catch fish has been around for many years. Fishing was done like this for centuries. For example, Indians in the Amazon River basin have used bow fishing as a means of gathering food for generations and still do today.

Bowfishing is believed to have been around even longer, dating back to the times of ancient groups of people such as the Aztecs, Inuits, and Aborigines successfully shooting fish with their bows.

A Bowfisherman can use a boat, the coastline, or fish in the shallows of a lake or stream. Bowfishing forums abound on the Internet, and outdoor guides offer bow fishing trips in the United States, Canada, Australia, and New Zealand.

The Bowfishing Association of America, established in 1990, served the original purpose of helping organize and track tournaments around the country.  Today they work to promote the sport of Bowfishing, maintain trophy fish records, and provide support to various clubs and regional Bowfishing groups.  As popularity continues to grow so does its membership which has surged over the last decade or so, growing from around 500 members in 2005 to nearly 4,000 in 2017.

The fish that are targeted by Bowfishing is classified by most sport anglers as “mudfish or trash fish” the ones that most fisherman cast on a day at the lake as the ones that you are not looking for. These fish species are considered “invasive nuisance species”.  Therefore, bowhunters are seen as a major part of the solution to limit the spread and environmental destruction caused by these fish that were introduced from other parts of the world.

One of these species can destroy the natural habitat of other more desirable species by overbreeding, overeating, and overpopulating an area that can tip the balance that nature has provided. Some of these undesirable classified fish can be eaten in fact one of my favorites is Catfish that is Channel Catfish which is a cleaner, is a staple down south, and very delicious.

Fish like the many versions of Carp and Suckers live and eat at the bottom of creeks and rivers where they are covered in mud. If it lives in mud then it probably tastes like mud.

There are 4 species of Asian Carp:

All of these species are an enormous threat to native fish populations and wildlife and are presently causing ecological chaos in the region that occupies here in the US. The Black Carp looks similar to the Grass Carp but is more elusive and least prevalent than the rest of the Asian Carp species.

The Silver and Big Head Carp are the most heavily populated of the Carp. These fish are hunted and targeted for the sport of Bowfishing.

They tend to hang out in shallower depths of water sometimes or just under the surface of the water. This makes them easy to spot and easy to shoot with a bow. Then there is the Grass Carp that can eat 3 to 4 times their body weight in aquatic vegetation.

This results in massive habitat destruction but makes for a good target hanging in shallows on the edge of the water in plain sight. The best time to Bowfish for Asian Carp is late Spring and summer.

There are literally hundreds of different kinds of Carp and some are native to the area but most are not. Asian Carp are not native to America in fact all Carp are a family of fish native to Europe and Asia. Bighead carp, Black carp, Grass carp, and Silver carp collectively known as “Asian carp” These fish were introduced into the Mississippi River and its WaterShed regions in the early 1970s to help control to control algae, weed, and parasite growth in aquatic farms, weeds in canal systems, and as one form of sewage treatment along the tributaries.

The captive fish eventually escaped the water of the Mississippi Basin and made their way as far north as Minnesota breeding as fast as they could swim and creating havoc along the way. Carp are also thought to lower water quality, which can kill off sensitive organisms like native freshwater mussels.

Asian carp have been known to dominate entire streams, effectively pushing out the native species. They are also known to jump out of the water to escape any danger that they perceive as a threat. Scientists are very worried that if these creatures were to get into the Great Lakes they destroy the huge Fishing Industry that exists there.

Researchers believe that among other solutions, Bowfishing could be a small answer that could be used to help control this environmental danger and help gain public interest,

To get yourself in the sport you’ll need a few pieces of equipment any type of archery bow will do longbow, recurved bow, or compound bow. Recurved and compound bows are a little

smaller but offer sufficient force approximately 40-50  pounds and take up less space in your boat. An archery sight on your bow is useless because it can’t account for depth or refraction, so it’s not recommended.

Too little the arrow won’t penetrate the water and the fish but too much and the arrow will go right through the fish. Then you got another problem. 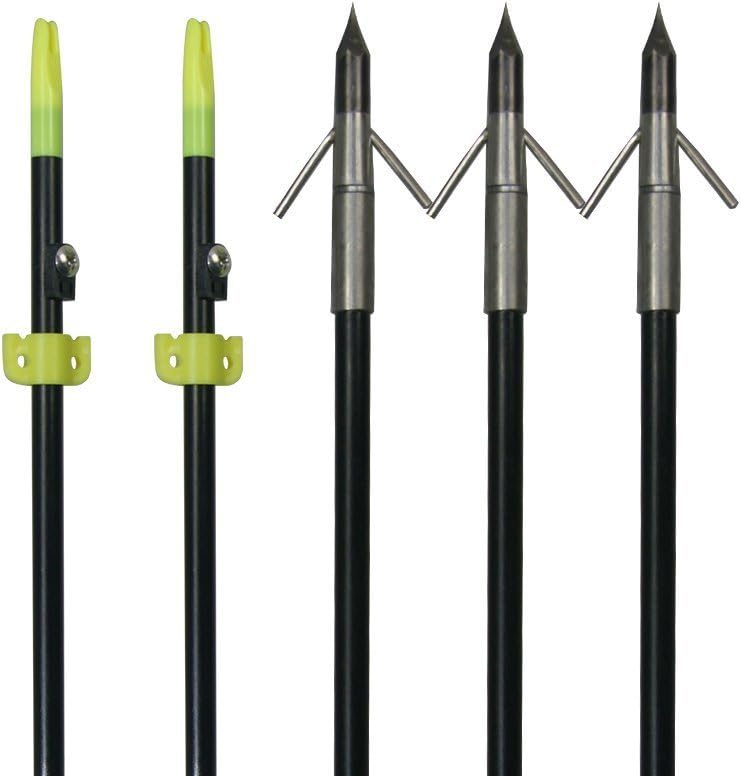 it’s moving through the water.

They normally have removal tips that screw off and the barb that is located at the tip is reversible so the fish will slide off the arrow.

The arrow should contain a safety slide mechanism that keeps the arrow. Here on these arrows, you can see the safety slides and retractable arrowheads, and reversible barbs.

Also, the arrowheads are barbed to stay in the fish. They have a way of tying the line from the reel to them, usually a slide mechanism of some type.

This slide mechanism prevents snapback. Last is the reel that attaches to the Bow. The fishing line is usually piled within a bottle, rather than wound around a spool, as it is in conventional reels.

Because the line travels it reels out much faster than a conventional line that’s cast from a rod.  A regular spooled reel would tangle up when you deployed the arrow. Some reels also have a float attached to the line so that you can track the fish. Optional equipment is close to what you would purchase for fishing like Waders, sunglasses, and other outdoor equipment.

A flat bottom boat with an electric trolling motor will be the best way to cover a lot of water while Bowfishing. These types of crafts are mostly used for the species of fish who live in shallower water that you’ll be hunting for.

Most fish are cold-blooded, which means their body temperature is regulated by the surrounding water. In fact, some fish prefer cold winter water to spring and summer. If you can stand the winter cold there are many species of fish waiting for you but you need to follow some advice from the guys that are on the ocean and on the lake’s ice no matter how cold it is because fishing won’t wait till Spring. Read our article on what you need to know about Cold Water Fishing

Like most outdoor recreation, a license or permit is probably required to Bowfish where you live.  The laws vary from state to state but it is a safe bet that you will need a regular sport fishing license to Bowfish.

There are a few states, like Washington, that do not require a license for Bowfishing for common carp. But the laws and regulations vary in all states. Before you go for any type of fishing or for any type of fish check with that State Fish and Wildlife page on the internet.

It’s easy to do and could prevent a lot of money that the state makes from people like you that think that it’s probably alright. So check with the State you are in. Seasons limits and locations are always specified when permits are issued for hunting and fishing. Be able to identify the fish you are hunting for and know the difference between a game fish and a non-game fish.

For the most part, Bowfishing is legal for non-game fish in most of the states in America and a few even allow Bowfishing for Game species like Bass and Catfish. Again check with the State you are in. Most people looking to use a Bow to fish are looking to shoot GarFish or Carp.

Never tie a line to the back of an arrow! The line will get tangled in the bowstring, and the arrow will come back at you. This danger is called snapback and usually results in facial injuries. Bowfishing arrows have slide mechanisms where the line is attached to the side of the arrow shaft. In this way, the path of the outgoing line doesn’t cross the plane of the bow and bowstring.

How to Aim When Bowfishing

The first rule in Bowfishing is to find out where the species of fish you are hunting are located. In Bowfishing, you want to aim your hit at the thickest part of the fish so the arrow securely anchors. But you can’t aim directly at the fish.

Light refraction in the water distorts what you see, meaning the deeper the fish, the lower you must aim. A good rule is to aim 3 inches lower for every foot of depth. Big fish especially Asian Carp make a pulsating ring design on the surface of the water from them sucking on the bottom which can give you a signal they are there even in cloudy water.

link to How Deep Should a French Drain Be

The last time I installed a French Drain it was around the perimeter of my inground pool whose, one side faced a steep uphill which brought a flood of puddling, mud, and mosquitos after every...

Continue Reading
link to How to Test Pool Water