The largest reservoir in the United States Lake Mead was formed when the Hoover Dam was built in the 1930s providing water and power to the Southwestern states of California, Nevada, and Arizona but in the last 2 decades have struggled to keep the water levels from falling recently up to 143 ft. that is 35% of normal capacity. Why is Lake Mead So Low?

The demand for water has led to problems at Lake Mead for years but this time coupled with Global Warming it could keep the capacity of the country’s largest man-made Reservoir lower for a longer period of time.

Is Lake Mead Drying Up 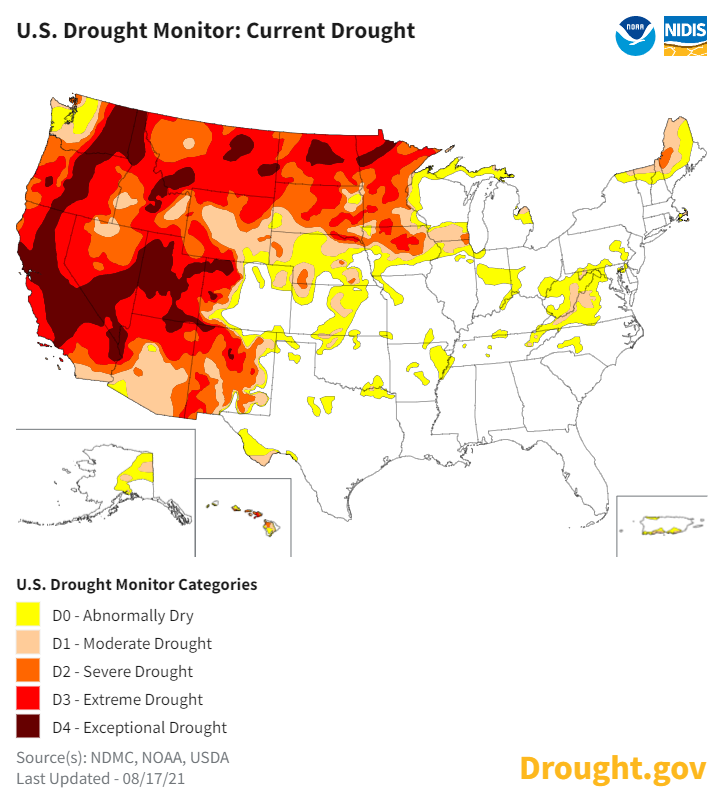 Lake Meade is the Water Reservoir formed by the Hoover Dan it has sunk to all new low levels in the past 20 years. The lowest levels are seen since the 1930s.  The Southwestern United States has been under a 21-year drought creating massive problems in this huge Reservoir that feeds California, Nevada, and Arizona filling almost 95% from the year 2ooo to only 35% today. Mead Lake is the largest water reservoir in the country.

These decreases in water levels at Lake Mead cause Drought, water shortages for consumption, agriculture, and energy shortages that the Hoover Dam site provides.

These shortages have been created by drought and human consumption in the arid regions of the Southwest US. Basically, there is more water going out of Lake Mead than there is going in.

The dam provides energy for over 1.3 million people in this area of the country. There are estimates of a 25% decrease in power available that normally is made at Hoover Dam directly because of the lower water levels at Lake Mead.

At full levels in the reservoir, the Hoover Dam can generate enough hydropower to accommodate 1 million people.

What really worries the people that operate and depend on this water system is the fact of warmer temperatures add more of a factor to drought and usage of this huge reservoir. Which evaporates more water creating more demand for the crippling system.

A lot of people see Lake Mead as a microcosm of the problem of Water Scarcity in the world happening before their eyes.

Ninety-six percent of the water flowing into Lake Mead comes from snowmelt that drains into the Colorado River. Early spring melt sends water surging through the river and into Lake Powell a man-made reservoir on the Colorado River in Utah and Arizona, United States.

It is a major vacation spot visited by approximately two million people every year. It is the second-largest man-made reservoir by maximum water capacity in the United States behind its southern partner on the Colorado River, Lake Mead. Water from this man-made reservoir, Lake Powell then spills back over into the Colorado River running Southwest through the Grand Canyon feeding Lake Mead and Hoover Dam.

In the event of a Natural or Man-Made disaster, the key is to be prepared and have solutions in the event food, or power can’t be provided because of a disaster situation and even water is unavailable for a period of time with no way of accessing it for multiple reasons. What would you’d you do if you had a swimming pool in your backyard. Read our article here on MyWaterEarth&Sky called Can You Drink Pool Water In an Emergency Lake Powell is a reservoir on the Colorado River, straddling the border between Utah and Arizona, United States. Most of Lake Powell, along with Rainbow Bridge National Monument, is located in Utah. Lake Powell sits at an elevation of 3,700 feet and is surrounded by a dramatic backdrop of deep sandstone walls.

Lake Mohave is located south of the Hoover Dam along the Colorado River at the southern end of the Lake Mead National Recreation Area. It’s known for its abundance of sandy coves and mix of the peaceful Black Canyon and high-octane open waters.

With Lake Powell at 3,700 ft. in the north collecting snowmelt from upper Colorado in Utah Lake Mead drops in elevation of 1,112 feet the Mohave Reservoir is last at 647 feet in elevation keeping the mighty Colorado River moving southward. Still, the amount of water in the system continues to drop.

Current updated water levels at Lake Mead can be found here at Lake Mead Water DataBase this site includes an interactive detailed map and a ton of information and is the most complete set of Colorado River water-related information you can find on the web. This site started with Lake Powell and now includes Powell and 6 other major lakes on the Colorado River. To access the water databases and the other features we have developed, just use the navigation menu on the top. Simply select the area that you want to review and navigate the menu to the specific item you want to see, as you would in any other application. Try it out for yourself.

Many cities have aging water infrastructures, that hold, treat, and deliver water some as old as 100 years. The structures and materials used in piping systems are reaching the end of, or are exceeding, their life expectancy. Incredibly, some water older systems contain bacteria, lead, and asbestos which became an environmental disaster in Flint Michigan’s water infrastructure. Read our article on MyWaterEarth&Sky called What is Water Infrastructure