There are important physical differences between a Baitcasting reel and a Spinning reel starting with placement and the direction of the spool. Baitcasting reels have a spool that’s in line with the fishing rod while spinning reels have a spool that’s perpendicular to the rod. These built-in differences offer some advantages and disadvantages. What are some pros and cons of fishing with a Baitcaster vs a Spinning Reel?

The Spinning reel which is in the easiest bracket vs. the Baitcast reel with the highest level of difficulty It took me a little while to maneuver the Baitcaster but the results are well worth it. I still use a Spinning Reel in lake water but for Largemouth my rods are a Baitcaster Reel & Rod. 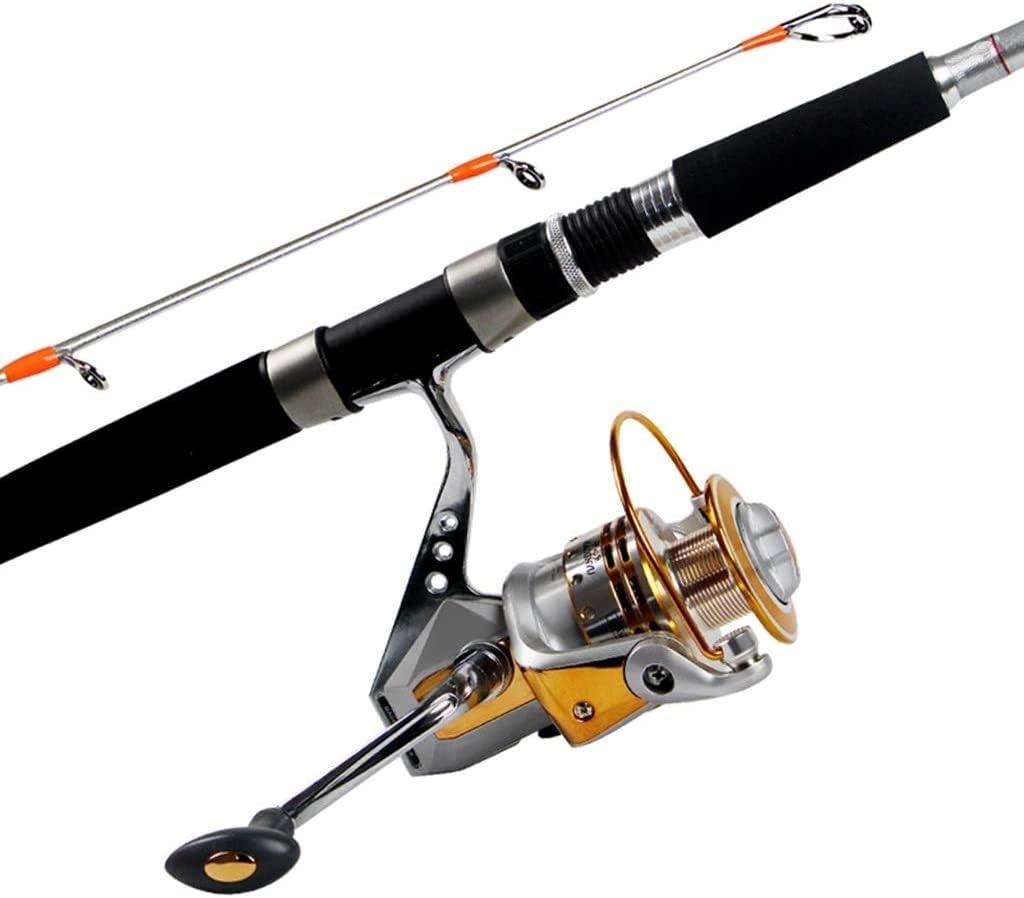 Simply put, the line on a Baitcaster Reel comes off the spool directly in line with the rod while the line on a spinning reel first heads directly away from the rod and then turns at the bail to follow the line of the rod.

An open-spool Spinning Reel is the more widely used fishing reel in the world today. It’s mainly because of how simple it is to use. It can be retrieved either left-handed or right-handed again built with simplicity as the number one priority detail for the Spinning reel.

They move with an easier approach and you can see everything that is happening while you are using it. Spinning reels are able to hold much more line on them than a Baitcaster reel and have an easier drag system, they also excel in lightweight technique.

Casting lighter lures can be controlled easier with a Spincasting reel and will actually come off by itself rather than the Baitcaster’s spool that needs to rotate as the line is removed from it. This means that it will take more force for the line to come off the spool of the baitcasting reel.

This is why Spinning Reels are easier to use lightweight lures and baits than the Baitcaster and a lot of that free movement has to do with the rod that a Spincasting reel is used with.

Spincasting Rods like this one called KDKDA Fishing Rod Reel Combos Fishing Poles with Spinning Reels for Bass Fishing Rods are very different than Baitcasting Rods used with Baitcaster reels. The reel hangs below the Spinning Rod along with the eyelids that hang well below the rod. Each eye receives even pressure and gets to share of pull. This gives the rod sensitivity that the Baitcasting Rod doesn’t get with its position on the pole. This gives the Spinning Rod a thinner backbone adding more sensitivity to the whole piece of equipment.

This will give the majority of action or play to most of the pole with the thickest part of the rod right below the Spinning Reel. This gives the majority of the action and plays throughout the whole rod but not everything is better in a comparison with the Baitcaster. 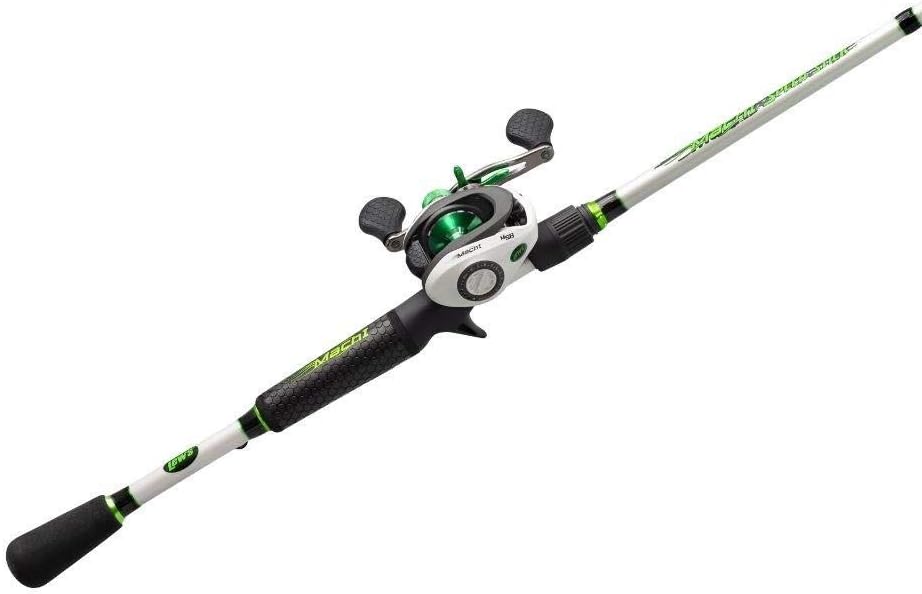 A Baitcasting Rod will have a thicker type backbone appearance to it. Rods that are used with Baitcaster Reels will have most of the flexibility at the end of the rod. This amounts to the rod being strong and stiff until the remaining 25% of the rod is where all the play is at.

These rods are meant for casting bigger, heavier stronger lures. the rod will have less whip and won’t have the ability to throw small light lures as you would be able to with the Rod used in conjunction with the Spinning Reel.

The Spinning Reel rod will make the presentation of live bait better for catching fish than the Baitcaster Rod. So why would you use Baitcasting Combos? There is plenty of reason.

The way the line wraps back on the Baitcaster and moves off prevents an often continuous problem that Anglers face called Line Twist. This is the most common problem especially if you are dealing with Spincasting equipment. Baitcaster Reels alleviate a lot of this dilemma because of how to line moves on and off the spool of a Baitcasting reel.

Another problem with Spinning equipment is accuracy. Baitcaster reels and rods have improved accuracy when casting. There is a lot of room for the fishing line to lose control because of how it is set to the pole and the first eyelid. The Baitcaster doesn’t have that.

With a Baitcaster like this one called Lew’s Mach 1, Speed Spool Baitcast Combo from Amazon the line and reel are close to the rod. The Eyes are much smaller on a Baitcaster Rod than on a Spinning Reel Rod. This will keep the line close to the Rod and almost touching which will keep the cast more accurate and controlled than the Spinning Rod will do. Close targets can be nailed by flipping and pitching with much more accuracy.

So by far according to lots of professionals, the biggest advantage of using a Baitcaster Reel and Rod over a Spinning Reel and Rod is power speed and accuracy while you are fishing for the Big Guy! A Baitcaster Combo is just a tighter and more controlled approach than Spinning Rods.

Besides the accuracy the is Speed. Casting Reels come in a variety of Gear Ratios from 4 to 1 up to 9 to ones. The vast amount of Casting reels is only in the 5 to 1 ratio area. An Angler just can’t move a Spinning Reel as fast as a Casting Reel. On topwater or heavier lures the Baitcaster Rod will just be tighter and faster than you can get from any kind of Spinning rod.

When you are fishing the edge of grassy slopes or trees where a Big Bass can pull you into a mess real fast then you need that kind of reality. With a Spinning Rod and Reel, you won’t have the same response that you will get with the speed of the Baitcaster equipment. What you need are a higher gear ratio and a faster tighter hook-set to land that fish.

Fishing With a Baitcaster Reel

Baitcasters do take some time to master and learn the art of casting and maneuvering. Like all sports equipment, there is a level of skill involved. That’s why some people will go back to Spinning equipment after using a Baitcaster combo. They most likely ran into an issue with casting it. They do require practice and do require some time to get used to. There is a lot to get used to with the Reel’s braking system and how fast the spool is moving.

They most likely dealt once or twice with a Birdnest and that was enough for a change of your mind to try out something new. In reality, the speed and power that can come from a Baitcaster Reel, and Rod is well worth the effort that can’t be matched.

How many Bass Pros do you see using Spinning equipment and How many use Baitcaster equipment? That pretty much tells the story. Once you get the hang of it and learn the technique it will open a whole new world of fishing for the user. Some of the things you need to know using a Baicaster Reel.

Brake systems- come extra on your reel as an adjustable brake system, driven by an internal pushbutton magnetic system, maximizes the casting distance while nearly eliminating

Backlashing or better known as Birdnestting can be a big problem with a Baitcaster reel. Baitcaster reels come with brake systems to help this but most of the Pros will tell you that practice is the best way of conquering this. Not paying extra to have this added.

Learn to use your thumb. (A big tip to prevent Backlashing is to brake with your thumb before your line hits the water). Another is to turn your wrist to the side so that the reel is sideways.

Baitcaster Reels are lightweight-If arm fatigue is an issue especially when you may be casting a lot, especially for Largemouth Bass where the anglers are constantly throwing lures and reeling back in.

Baitcasting reels offer advantages over the spinning reel once you’ve learned the technique. The drag system works much better because the line never turns but rather comes straight off the spool.

Spinning reels without exceptional drags can tighten on their own or slip and catch at the bail making it easier for the line to break.

If you are getting a lot of Backlashes right at the end of your cast dial the numbers up on your braking system for your Reel. In fact, you may want to keep them up higher until you start getting better at controlling your Baitcaster reel.

As your reel starts to spin harder and faster towards the end of the cast, this will help slow it down to keep control of the line on the spool preventing Backlash. Start with this technique: 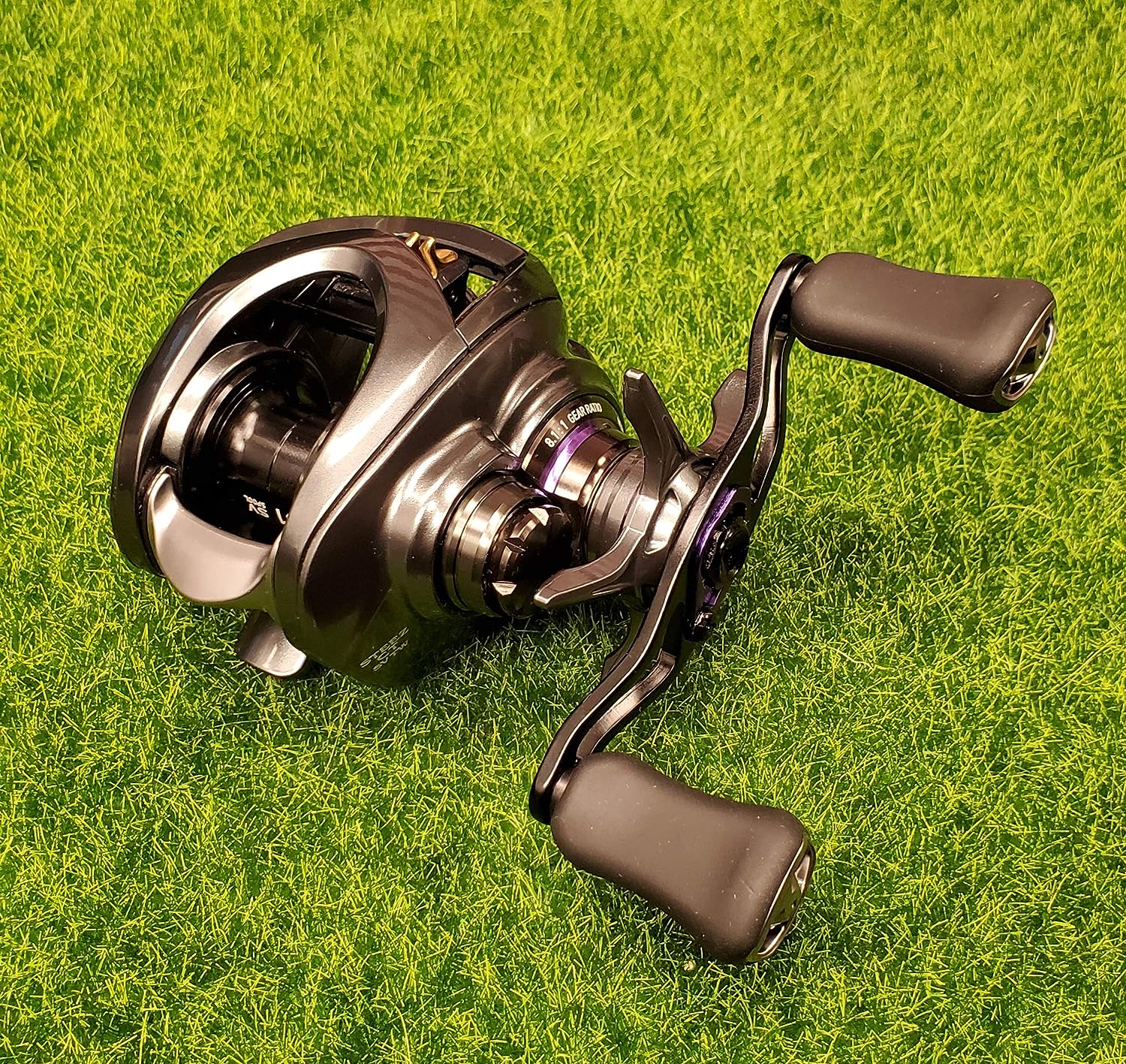 I included this video that explains the Basics of Using a Baitcaster. He explains the parts of your Baitcaster Reel, setting your drag and Brake, and of course, Casting without causing the ultimate bummer when fishing with any kind of Fishing Reel-Birdnestting.

For more great articles like this on Fishing Rods & Reels or anything water stay right here at MyWaterEarth&Sky-as we anticipate the upcoming freshwater fishing season, maybe it’s time to take a second look at replacing or just adding that extra fishing rod to your arsenal. Maybe you ……………………… Continue reading