One of the funniest stories I heard in a  while had to do with Sea Foaming that is occurring throughout the world with some places getting more than their fair share. Blowing up from the beach onto the street in coastal towns blocking traffic and causing a stir with people speculating what this foam is made from, the weirdest explanation being that it had something to do with the sperm of a whale. Is Sea Foam Wale Sperm?

No, Sea Foam is not whale sperm. Sea Foam created by the agitation of sea H2O contains high concentrations of dissolved organic matter including proteins, lignins & lipids derived from sources such as the offshore breakdown of algal blooms. These compounds can act as surfactants or foaming agents.

In places like Southeast Queen’s land Australia Seafoam has become more than a natural occurrence at certain times of the year. The foaming from their coastal towns has made its way from the surf to the beach to inside city streets where this global phenomenon has become worrisome to its residents because of the Seafoam’s origin and ingredients.

What is Sea Foam Made Of Seawater is full of tiny particle that is organic and some inorganic matter like dissolved salts, proteins, fats, dead algae, detergents and other pollutants, and a bunch of other bits and pieces of organic and artificial matter.

You just can’t see it unless you are studying it up close or you take a sample and shake it up. When that material that collects in the ocean hits the surf, churned up presenting itself as bubbles and foam. Most people don’t believe the Whale story at least at the Jersey shore where I’m from.

Water in some beaches and surf are more agitated than others and the foaming problem that happens all over the world might be more prevalent in one area because of the wind, currents, and rougher surf. The Foam is made up of Algae Blooms that are found in freshwater and saltwater that contribute to foaming. Nutrients and organic material that floats on the surface of water get mixed up by wind and tides and end up on the beach.

According to the (NOAA which) is The National Oceanic and Atmospheric Association: Most sea foam is not harmful to humans and is often an indication of a productive ocean ecosystem. But when large harmful algal blooms decay near shore, there are potential for impacts to human health and the environment. Along Gulf coast beaches during blooms of Karenia brevis, for example, popping sea foam bubbles are one way that algal toxins become airborne.

The resulting aerosol can irritate the eyes of beach goers and poses a health risk for those with asthma or other respiratory conditions. Scientists studying the cause of a seabird die-offs off California in 2007 and in the Pacific Northwest in 2009 also found a soap-like foam from a decaying Akashiwo sanguinea algae bloom had removed the waterproofing on feathers, making it harder for birds to fly. This led to the onset of fatal hypothermia in many birds.

So with excessive Seafoaming, there are some environmental hazards associated with it but mostly the dangers are unknown. It is known that Sea foam contains ingredients of proteins, lignins, and lipids derived from sources such as the offshore breakdown of algal blooms. These compounds can act as surfactants or foaming agents and the more they contain and the more agitated the water the more foam is produced.

Essentially Sea Foam is totally natural and is not a big event compared to other bigger natural occurrences. Sea Foam might contain pollution or contaminants from Sewer or Stormwater drains that are in the vicinity of the blankets of Seafoam that are accumulated and end on the beach.

Harmful Algae Blooms or (HABs) can occur in all types of water Harmful are a major environmental problem in all 50 states. Red tides, blue-green algae, and cyanobacteria are examples of harmful algal blooms that can have severe impacts on human health, aquatic ecosystems, and the economy. Harmful algal blooms are the overgrowth of algae in the water. Some algae blooms produce dangerous toxins in fresh or marine water but even nontoxic blooms hurt the environment and local economies. They are mostly caused by Nutrients (nitrogen and phosphorus) along with temperature, Sunlight, and Slow-moving water.

The NOAA monitors HABs algal blooms sometimes known as “red tide”, which occur when certain kinds of algae grow very quickly, forming patches, or “blooms”, in the water. These blooms can emit powerful toxins which endanger human and animal health. Reported in every coastal state, HABs have caused an estimated $1 billion in losses over the last several decades to coastal economies that rely on recreation, tourism, and seafood harvesting, especially in places like Florida.

Normally, Florida’s naturally occurring Red Tide species, Karenia Brevis (HAB) begins in the late summer or early fall & lasts through the winter until February or March, where it dissipates because of sustained winds, lack of nutrients, or predators. Read my article on MyWaterEarth&Sky called What Causes Sea Foam hopefully, it will take the mystery out of this common occurrence. 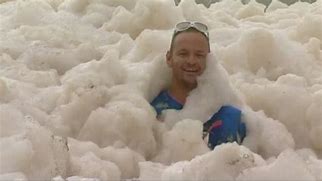 So let’s get to it, shall we? Incredible enough, Whales have some of the smallest sperm of all mammals. They vary from 50-75 microns, whereas human sperm is 40-90 microns long. It is thought that whales have such small sperm because the female reproductive tract is so large that having longer sperm doesn’t give a male any extra advantage.

A Blue whale ejaculates 5 gallons of semen at a time and up to 30-40 gallons. most of the time is washed out of the female into the ocean. Just a drop in the bucket in the ocean, Yes, I found it on Google. According to Trevor Branch, a blue whale researcher at the University of Washington told BuzzFeed News.

In my humble opinion, If the whale’s sperm is so small and the amount in an ocean is minimal at best, it’s kind of counterproductive to the opinion that Sea Foam is made up of whale sperm. Seafoam is a worldwide phenomenon and how bad it gets is depending on location and the potential influence of the surrounding marine, freshwater, and/or terrestrial environments. Due to its low density and persistence, foam can be blown by strong ocean shore winds from the beach that face inland and can cause some trouble if not fascination to coastal dwellers filling city streets with blankets of foam.

Most Sea Foam is not harmful and is often a sign of a healthy ecosystem. Still, when large healthy alga blooms decay too close to shore they have the potential for a negative impact on human health and the environment.

Deep-Sea News-Attack of the Sea Foam, It’s Not Whale Sperm