The amount of oxygen dissolved in a stream or lake’s water can indicate a lot about the water’s quality and how well it can sustain the smallest to the largest aquatic life and testing how much is present is important for the overall condition of any body of water throughout the world.  Oxygen is necessary for aquatic life, like flies, insects, plants & and assorted species of fish like Trout & Bass replenished and as healthy as possible with the right amount of oxygen. How much Oxygen do fish need?

Dissolved Oxygen or (DO) in a stream or any body of water may vary from 0 mg/l to 18 mg/l. Readings above 18 mg/l are physically impossible. Dissolved oxygen gets into the water by diffusion from the atmosphere, aeration of the water as it tumbles over falls and rapids, and as a waste product of photosynthesis.

How Do Fish Get Oxygen 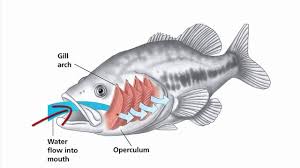 Fish breathe with their gills, and they need a constant supply of oxygen. Gills sit under the operculum. This is called the gill slit. Many fish have four pairs of gills, while sharks may have up to seven. Even though fish can live their lives underwater, they still need oxygen to “breathe”. Instead of breathing air, fish must get their oxygen from the water. This process requires large volumes of water to pass through absorption surfaces to get enough oxygen into their bodies using their mouths and gills. These body parts work like a pump to keep water moving over the gas absorption surfaces of the gills.

Just like in humans the Carbon Dioxide in the fish is expelled with the water it takes in as the oxygen is pumped through their body in the water. Because there is normally more oxygen in the water than the gills of the fish the oxygen from the water diffuses into the fish. The oxygen can then attach to hemoglobin, a protein in red blood cells that distributes oxygen throughout the body.

What is Dissolved Oxygen in Water

Aquatic species like, bacteria and fish depends on oxygen that’s dissolved in solution to live. There is always some Dissolved Oxygen underwater but the amount can depend on some variables like temperature and salinity among other organic materials that use up the dissolved oxygen in the water.

Some fish species can live with less just like some species of fish need more oxygen to live comfortably in their environment. Fish like Salmon adapt to cold water because colder water can hold more oxygen in dilution.

There are kinds of fluctuations that can affect the balance of nature including the food source of the fish who live in the ecosystem. Depletion in DO can cause major shifts in the kinds of aquatic organisms found in water bodies. Species that cannot tolerate low levels of DO – mayfly nymphs, stonefly nymphs, and beetle larvae – will be replaced by a few kinds of pollution-tolerant organisms, such as worms and fly larvae. Factors affecting the DO of the stream will end up affecting the fish that inhabit the stream eventually.

How Does Temperature Affect Dissolved Oxygen

Although water molecules contain an oxygen atom H2O, this oxygen is not what is needed by aquatic organisms living in natural waters. Only a small amount of oxygen, up to about ten molecules of oxygen per million of water, is actually what is dissolved in water. Oxygen enters a river or a stream mainly from the atmosphere and, in areas where groundwater discharge into streams is a large portion of streamflow.

This dissolved oxygen is breathed by fish and zooplankton and is needed by them to survive. Fast-moving streams and creeks can pick up oxygen splashing over rocks from the current. This movement adds more healthy oxygen to dissolve in the water. The cooler or colder the stream’s water temperature is the more oxygen it can absorb. As the water movement slows and warms becoming stagnant the water contains less oxygen. These water Temperatures have a direct effect on how much Dissolved Oxygen the H2O can saturate or hold in solution.

As the seasons change and temperatures rise the water dissolved oxygen becomes less the surface temperature can rise to deplete the levels of oxygen. Excess organic material in lakes and rivers can cause eutrophic conditions, which is an oxygen-deficient situation that can

cause a water body to “die.” Aquatic life including fish can have a hard time in stagnant water that has a lot of rotting, organic material in it, especially in summer temperatures. Too many nutrients needed by green plants and cyanobacteria to grow or bloom will end up having a negative effect on the environment once they die and start to decay will use up all the oxygen that is available for a normal balance.

Conditions may become especially serious during a period of hot, calm weather, resulting in the death of many fish. You may have heard about summertime fish kills in local lakes that likely result from this problem. Nutrients like nitrogen and phosphorus can be created by pollution or natural decaying that can result in algae blooms especially when the warmer temperatures arrive.

This occurrence will deplete the Dissolved Oxygen at a faster rate than it can be replaced. These conditions called Eutrophication can cause fish kills that eventually cause more oxygen depletion. This happens a lot at effluents of Wastewater Treatment Plants as a result of the overabundance of nutrients that are a byproduct of sewage which will cause algae blooms mostly green but sometimes red in the case of Florida that suffers from the dreaded “Red Tide”

How Much Dissolved Oxygen Do Fish Need

You can see that cold-water fish that normally found in the Alaskan streams that run off mountains fed by snowcaps like Trout and Salmon are found in freshwater with higher DO Mg/L and Northern Alaskan cold water Halibut and Crab that are deep in the North Atlantic are found in deep cold water with a little less Dissolved Oxygen content.

DO levels rise from morning through the afternoon as a result of photosynthesis, reaching a peak in the late afternoon. Photosynthesis stops at night, but plants and animals continue to respire and consume oxygen. As a result, DO levels fall to a low point just before dawn.

Dissolved oxygen levels may dip below 4 mg/l in such waters – the minimum amount needed to sustain warm water fish like bluegill, bass, and pike. Under EPA laws in most states, 4.0 mg/l is a  constant parameter for receiving streams from Wastewater Effluents to ensure the balance of the river or stream is always met. Not only for fish but for the mayflies, caddisflies, stoneflies, and all aquatic life that populates the ecosystem.

The generally accepted minimum amount of DO that will support a large population of various fish is from 4 to 5 mg/l. With 5mg/l being preferable for a fish’s overall health. When the DO drops below 3 mg/l, even the hardy fish die.

Bluegill, Largemouth Bass, White Perch, and Yellow Perch are considered warm-water fish and depend on dissolved oxygen levels above 5 mg/L. They will avoid areas where DO levels are below 3 mg/L, but generally do not begin to suffer fatalities due to oxygen depletion until levels fall below 2 mg/L. The mean DO levels should remain near 5.5 mg/L for optimum growth and survival

Trout and Salmon generally attempt to avoid areas where dissolved oxygen is less than 5 mg/L and will begin to die if exposed to DO levels less than 3 mg/L for more than a couple of days. Other species might stay for a while and become tolerant for short periods before moving on.

How To Measure Dissolved Oxygen In Water The more oxygen in a body of water the more easily aquatic organisms can survive and flourish making the environment healthy and adaptable for fish to populate and food sources to be available. State Fisheries use high standards for Dissolved Oxygen. In Coldwater fisheries, the parameter should never go below 4mg/l, and for warm water fisheries. They also use a 30-day average that should never go below 6.5 mg/l for Coldwater fish and 5.5 mg/l for Warmwater fish.

There are a couple of ways to measure DO in the field and a lab setting DO Chlorimetric Kit which is found on Amazon that will measure a known color comparison like you would in a swimming pool or a Winkler method that has been used in Water testing Labs for many years.

For the serious Fisherman toolbox, a measurement for Dissolved Oxygen will show you in the field how healthy the water you are fishing in is. Now Portable DO Meters are available and very reliable easy to celebrate and operate. Along with the insight of what fish are looking for in the environmental conditions. This one TIZJ Dissolved Oxygen Meter with DO Probe, Tester Water Quality Monitor PH Conductivity or Salinity or TDS Dissolved Oxygen Temperature will give temperature and more importantly Salinity levels and there are no conversions what you direct readout is what the DO is mg/l. Large LCD with multiple parameters display simultaneously

Check these guys out! and take your Tacklebox to another level. If you buy one you should get one that is rechargeable waterproof and come with a probe that you can use from standing above.

References: How Do Fish Breathe? The Science Behind Gills