The Hudson River although fairly small compared to other rivers in the United States is very important and has a rich history. Its banks have been inhabited by Native Americans for hundreds of years but the future New York City would make the Hudson one of America’s most important natural resources. Where Does the Hudson River Start and End?

Hudson’s waters run cleaner and clearer than they have in decades. Years of hard work by dedicated scientists, environmental activists, and government officials, have paid off by opening Hudson’s shores to swimming, fishing, and boating, revitalized public beaches, boat launches, parks, and fishing access sites dot the estuary’s shores, and opportunities for outdoor activities abound on this small river with a ton of importance.

Where Does the Hudson River Start

The headwaters of the Hudson River originates from the Lake Tear of the Clouds which is located close to the base of Mount Marcy in the Adirondack Mountain Range at an elevation of 1,317m. In the initial stages of its course, the river is known as the Feldspar Brook till it joins with the Opalescent River. The mighty Hudson River about a mile from its source high in the Adirondack Mountains on Upper Works Road, it’s a beautiful crystal clear trout stream here with fast rushing waters. It’s only 20 feet wide at this spot.

As the Hudson comes out of the mountains, it picks up additional water from many feeder streams. There are a number of large dams to supply power plants, which divide the River into “lakes” suitable for recreational activity.

The Hudson River is not your typical river. For about half its length, the Hudson is actually a tidal estuary, when saltwater from the ocean combines with freshwater from northern tributaries. The Hudson is considered a tidal river that uses ocean tides from the mouth of the Hudson in New York Harbor to the Federal Dam in Troy, a distance of about 153 miles.

The “salt front” or “salt line” of the river where the saltwater and then brackish water(which is salt and fresh water mixed together) from the ocean is blocked by freshwater descending down north to south from Hudson’s watershed ranges from the Tappan Zee Bay near Tarrytown and Nyack in springtime, to Newburgh Bay in the summer, to farther north during droughts.

How Long is the Hudson River

Hudson River, the river flows north to south for approximately 315 miles most of it entirely in New York state, in the U.S. except for a small portion where it forms the boundary between the state of New York and New Jersey for about 21 miles. The river is a tidal estuary, meaning it is a mix of fresh water and saltwater.

The Hudson originates in the Adirondack Mountains near Mount Marcy (5,344 feet [1,629 meters]), the highest point in New York, and flows nearly all the way through the eastern part of the state. Its sourced by Lake Tear of the Clouds Lake in Essex County New York regarded as its main headstream, along with the Opalescent River. Lying over 4000 feet in elevation these bodies of water are considered the highest lake and rivers in New York State. The most unique fact about the Hudson is that it’s affected by tide all the way to Albany NY.

In the northern region of New York, the river has its confluence with the Mohawk River, which is the largest tributary of the Hudson River, in Waterford. The river then reaches the Federal Dam in Troy, marking an impoundment of the river. The river is named for the Mohawk Nation of the Iroquois Confederacy.

The Hudson River Watershed which includes the Hudson River and all its tributaries drains an area of 34,000 sq. km and covers major portions of New York as well as the portions of the states of New Jersey, Connecticut, Vermont, and Massachusetts. Due to the glaciation and the rising sea levels, the lower portion of the river is a tidal estuary that occupies the Hudson fjord, which was formed about 26,000 to 13,300 years ago. The Hudson River was born from the northern glacial ice. Starting at an elevation of 4,590 feet and ending at Upper New York Bay with an elevation of 0 feet. The river’s basin comprises a total area of 14,000 square miles.

There are at least 1,600 dams (I doubled checked) in the Hudson River estuary watershed between Albany and New York City, according to the New York State Department of Environmental Conservation (NYSDEC). About half of the river’s 67 tributaries are dammed.

Most are small structures like milldams, installed by factories that have long since closed, and serve no purpose now but to block fish and other aquatic species, impair river ecology, and alter water flow. There are palns for these small type dams to be removed.

The lower half of the Hudson River, in the northern part of New York below Troy (approximate 153 miles) is an estuary where freshwater from over 60 tributary streams is met by salty seawater being pushed upriver by the ocean tides. The Hudson River reaches a maximum depth in excess of 200 feet. The river is maintained to have a minimum depth of 30 feet to be used as a shipping channel. 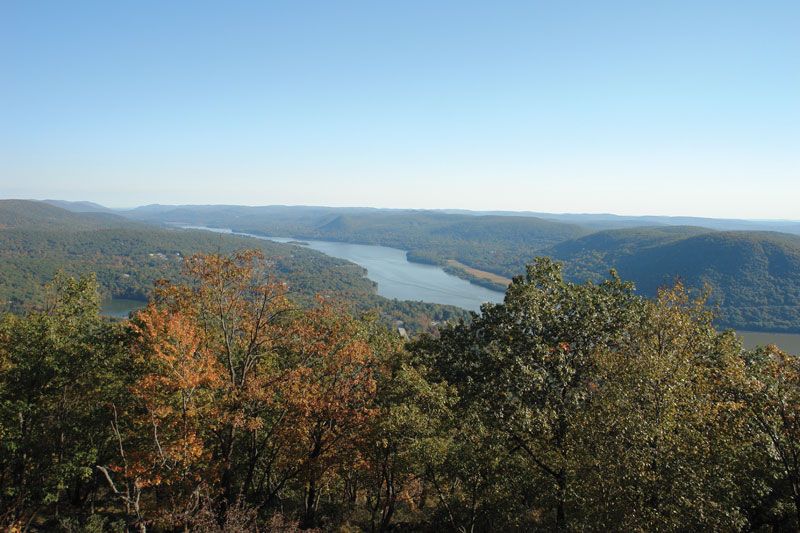 The Hudson is named after Henry Hudson, an Englishman who captained the first ship to sail up the river and who was financed by the Dutch East India Company. He explored and charted the river along with the Hudson region in 1609, then later Canada’s Hudson Bay, which he also is named after.

It had previously been observed by an explorer from Italy named Giovanni da Verrazzano sailing for King Francis I of France in 1524, as he became the first European known to have entered the Upper New York Bay, but he considered the river to be an estuary. The object of explorers in their day was to find a northwest passage in this new continent.

The river was known to the Mahican or The Mohican Indians as Muhheakunnuk (“Great Waters Constantly in Motion“) Early settlers considered the Hudson as a gateway to the interior of the nation. Dutch settlement of the Hudson Valley began in 1629, and the serene beauty of the region near Tarrytown formed a background for the stories of Washington Irving. The Hudson was also the eastern outlet for the Erie Canal, which, when completed in 1825, became an important transportation artery for the early-19th-century United States.

The Hudson River because of its close proximity to Montreal and New York City along with its ability in connecting to the Great Lakes and the Missippissi River served of great importance and strategy in both the French and Indian and the Revolutionary Wars. As a result of the strategic location afforded the Hudson River, numerous battles were fought along the river and in nearby waterways.

In recent history, in January 2009 on a cold day on the Hudson River, US Airways Flight 1549 departed LaGuardia Airport in New York that was interrupted when birds shut down the plane’s engines, and Captain Sully Sullenberger with the first Mate Jeffery Skiles made modern aviation history by landing their aircraft on the famous Hudson River. This would be known as The Miracle on The Hudson.

Where Does the Snake River Begin and End

Where Does the Hudson River End

The Lower part of the Hudson River acts as a tidal estuary and experiences two distinct high tides and two low tides every day. The tidal current moves northwards at a very slow rate such that different portions of the river can experience high tide and low tide at around the same time.

These strong tides often make portions of the New York harbor dangerous and difficult to navigate. During the winter months, the ice floes drift southwards or northwards depending upon the flow of tides. The Hudson River reaches a maximum depth of 62m at its widest point known as the “World’s End” which is located between the Constitution Island and United States Military Academy or West Point.

The Hudson River is lined with cities and towns and a railroad system along with roads but the beautiful views haven’t changed since Henry Hudson’s historical voyage. The river has kept its towering cliffs and fresh and saltwater marshes teaming with fish birds and wildlife from the high in the Adirondacks to the Atlantic Ocean.

Where is the Yukon river

The River-Removing Dams on the Hudson Valley Rivers